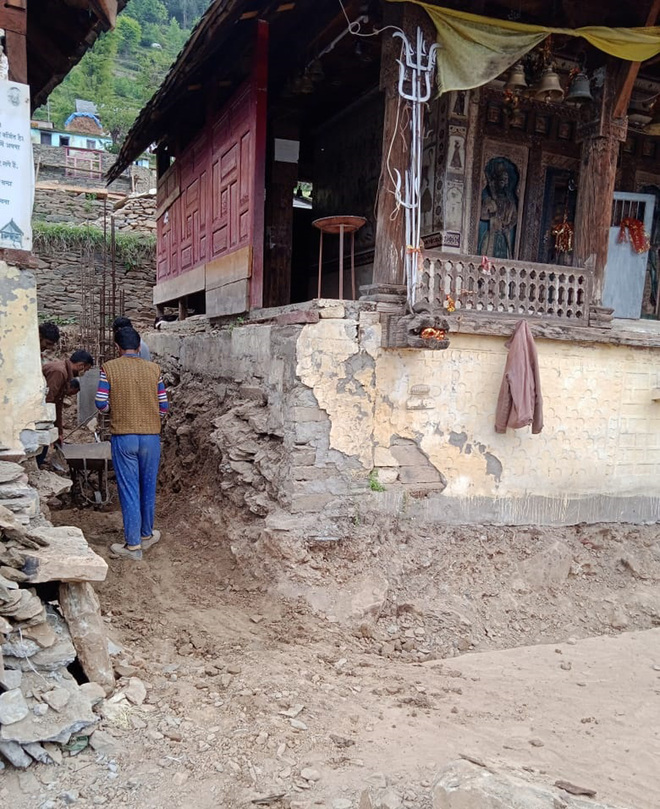 Re-construction under way at the Chamunda temple in Chamba district.

Art lovers are upset at the destruction of the heritage in the Chamunda temple at Devi Kothi village in Churah of Chamba district.

Sources said about two century-old temple was being re-constructed by contractors without any advice from experts. The contractors were concretising the temple building that had damaged its frescos.

Vijay Sharma, an expert in Kangra painting and Padma Shri awardee, said the temple was on the verge of destruction. The existence of the temple had been endangered by some ‘rookie’ contractor.

Malvika Pathania, coordinator of the Indian National Trust for Art and Cultural Heritage (INTACH) for Himachal, said it was shocking that the frescos of the temple had been damaged. She said, “I had talked to Chamba DC and urged him to stop the work”

The temple was built by then Chamba king Umed Singh in the mid-18th century. Constructed in the hill style with sloping roof terrace, the temple was embellished with frescos and carved wooden panels. The amazing architecture of the temple and the work of painting and carving was so exquisite that thousands of tourists visit the village every year.

Dr Eberhard Fischer, director of the Swiss Museum, and Vijay Sharma jointly wrote a book on the temple which was available online and has attracted experts from across the world towards the art heritage of Chamba. The temple was preserved some years ago by the Department of Language and Culture. The government had also appointed a monument attendant to protect it.

Malvika Pathania said the ancient form of the temple could not be changed at any cost. Archaeology Act rules have the provision of punishment for such act. The unplanned construction in the temple without any vision continues despite the lockdown, she said.

Deputy Commissioner DC Rana said the committee of the temple had started the RCC work on the temple campus which had been stopped. The RCC pillar around the temple would now be removed and the temple be renovated using wood and local rock in a traditional manner.