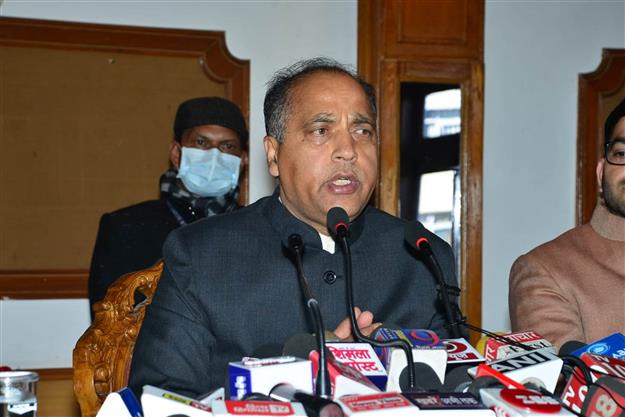 Chief Minister Jai Ram Thakur today said that the Congress in the state was in turmoil over the leadership issue, which would make the going tough for the party in the Assembly elections due next year.

Chief Minister Jai Ram Thakur today said that the Congress in the state was in turmoil over the leadership issue, which would make the going tough for the party in the Assembly elections due next year.

“The situation for the Congress will get tougher as the Assembly elections draw nearer, as the party is witnessing a power tussle amidst the talk of appointment of five working presidents, besides a president,” he said. The fortunes of the Congress had been on the decline across the country and the party was heading for a split in Uttarakhand while the situation in Himachal was no better, he added.

Chief Minister Jai Ram Thakur admitted on Friday that there were bound to be changes in the party organisation and the Cabinet in the election year, as was the practice in most of the other BJP-ruled states.

“The massive turnout at the Mandi rally that was addressed by Prime Minister Narendra Modi has helped lift the sagging morale of BJP cadres after the party’s defeat in the four byelections,” he said. He added that the Prime Minister’s Mandi rally had given the much-needed impetus to the BJP for the forthcoming Assembly elections.

Thakur said that the BJP’s central leadership comprising the Prime Minister, Home Minister Amit Shah and national party president JP Nadda takes every election very seriously. “The same cannot be said for the Congress, which is in total disarray, both at the Centre and in the states,” he added.

The Chief Minister said that the Prime Minister was expected to visit Himachal at least three or four times next year. He added that he had urged the Central Government to enhance the limit of interest free loan to Himachal to Rs 600 crore next year. “With the provision of GST compensation from the Central Government being stopped, Himachal stands to lose Rs 3,500 crore annually, besides losing Rs 2,000 crore due to the revenue deficit grant also coming to an end,” he said.

Thakur said, “Himachal has very limited revenue generating resources, hence the Central Government must provide some grant to the help establish the airport at Mandi, which will help give a major boost to tourism. I have raised the issue with the Central Government to make an allocation for the maintenance of around 20,000 km roads constructed under the Pradhan Mantri Gramin Sadak Yojana (PMGSY), as the state has no funds to repair and maintain them”.

Meanwhile, regarding change of guard the Chief Minister said, “There is every possibility of a reshuffle in the Cabinet. And in the election year, there are bound to be changes, as witnessed in other BJP-ruled states.”