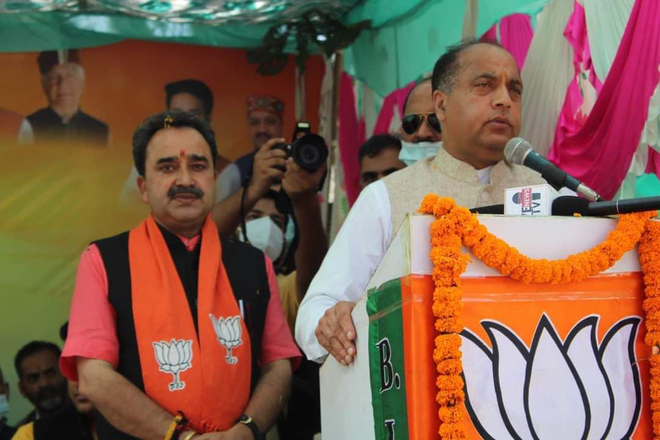 Chief Minister Jai Ram Thakur today said the Congress had imported its star campaigners as it did not trust its leaders in Himachal.

Mocking at their campaigners, Thakur said the party had roped in campaigners like Kanhaiya Kumar who had made questionable statement in the past, while Navjot Sidhu had popularised Rahul Gandhi as ‘Pappu’.

While addressing a poll rally at Darlaghat in favour of BJP nominee Rattan Pal, Thakur said both Sidhu and Kanhaiya Kumar had joined the Congress keeping in view their future but the party was in dire straits. These leaders were roped in to improve the poll prospects of the Congress though their own credibility was questionable.

He said the Congress was bereft of leadership in the state and its leaders were seen pushing each other during the nomination of their official nominee at Mandi.

The Chief Minister, however, desisted from criticising former Arki MLA and said, “Many works were yet to be completed in Arki as former MLA Virbhadra Singh could not spare enough time for the constituency due to his ill-health. People had voted for Virbhadra last time and now they should vote for their nominee Rattan Pal”.

Thakur recalled how Virbhadra Singh had won by a narrow margin of less than 6,000 votes from Arki, which perhaps was his lowest victory margin.

He said despite Covid, development of the area did not suffer.