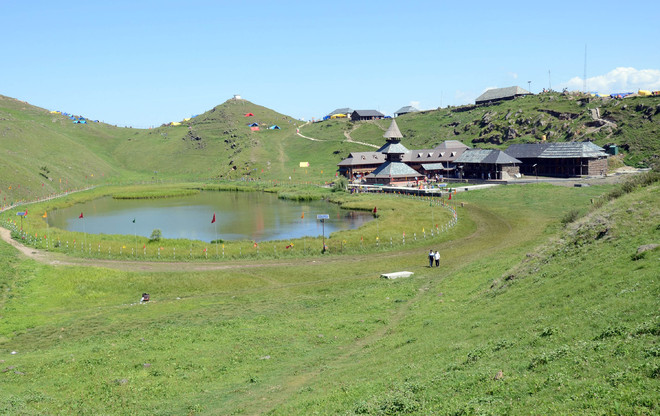 Prashar lake and temple, famous among devotees as well as tourists coming to Mandi, wears a deserted look amid the coronavirus pandemic. Photo: Jai Kumar

With Covid threat looming, two historical religious festivals, one at Kamrunag and the other at Prashar in Mandi district, have been called off. Every year, the two-day religious festivals are held at Kamrunag valley and Prashar lake on June 15 and 16, in which a large number of devotees from across the state pay visits to seek blessings of local deities Kamrunag and sage Prashar.

Blessed with a bounty of nature, both religious places are also major attractions for tourists in the district. The temple sites are scenic and natural lakes have been developed around them.

Talking to The Tribune, Shivpal Sharma, president of the Kardar Sangh, Mandi, said the Kardars (caretakers of deities) had decided to cancel both religious festivals this year due to Covid threat.

“Every year, hundreds of devotees visit both the religious places to seek the blessings of local deities because they have deep faith in them. But due to the heavy rush of people, it would not be possible for temple committees to ensure social distancing,” he remarked.

Mandi Deputy Commissioner Rugved Thakur said people of the district had approached the administration to reopen the temples but a decision of the state government on the issue was awaited.