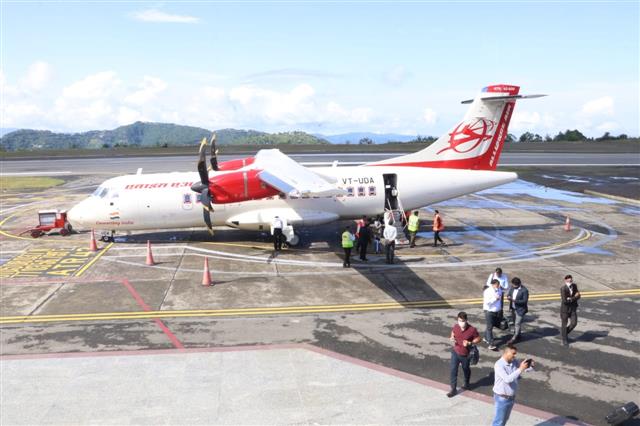 Now, air travellers going to Delhi from Kullu will have another cheaper option to go through Shimla from October 11. The newly inducted ATR-42 600 series aircraft of Alliance Air is scheduled to commence operations between Shimla and Kullu for four days a week on Tuesdays, Thursdays, Saturdays and Sundays.

The normal fare between Kullu and Shimla for the 50-minute flight is Rs 5,488 while the senior citizen fare is Rs 3,126. The fares from Shimla to Delhi till November 1 are generally exorbitant -- around Rs 18,725. However, the fare after November 2 is Rs 3,299, including online charges of Rs 350.

Kullu to Delhi journey through Shimla will cost about Rs 8,787. Earlier the fares ranged from Rs 22,813 to Rs 26,121 for the 80-minute flight from Kullu to Delhi, which used to hop at Chandigarh both ways during the weekdays. Now the airline is also offering a fare of Rs 14,900 from Kullu to Delhi after the announcement of flight between Kullu and Shimla. The airline was also providing a senior fare on the Kullu-Delhi sector.

The flight will depart at 7.55 am from Shimla and arrive at Kullu at 8.45 am and depart back to Shimla at 9.05 am and arrive at 9.55 am. The flight will further depart to Delhi at 10.15 am and reach there at 11.25 am. The schedule of the second flight between Delhi, Chandigarh and Kullu will remain the same.