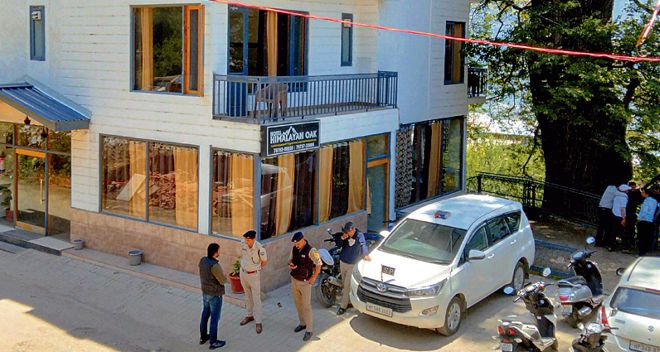 Policemen at the hotel in Manali where the incident took place in the early hours of Friday. PTI

A 32-year-old Delhi businessman allegedly shot dead his wife’s friend before turning the gun on himself at a hotel near Manali on Friday.

Sources said Ravleen Kaur Chawla (30) and her sister Ashneet Kaur (24) of Delhi had taken Hotel Himalayan Oak at Shuru village on lease from a local about six months ago. Ravleen’s husband Rishabh Saxena was running a camping business in the Ghiyagi area of Banjar subdivision in Kullu. In her statement to the police, Ravleen alleged Rishabh armed with a pistol reached the hotel around 4 am. He got infuriated on seeing her friend Sunny Sheravat (31) at the hotel. After assaulting her, Rishabh shot Sunny and turned the gun on himself, she alleged. Both Rishabh and Sunny died on the spot.

Kullu SP Gurdev Sharma said the police reached the spot and found room No. 102, where the firing took place, locked from inside. The police entered the room from the rear balcony and found the bodies of two men. The cops also recovered three bullet casings from the spot.

“The incident has been recorded in the CCTV cameras installed on the property. The crime scene has been secured,” Sharma said, adding a case had been registered and further probe was underway. Ravleen, who sustained a bullet injury, was undergoing treatment at the Civil Hospital, Manali.

The SP said a forensic team had been called at the spot. “Prima facie, it seems the women has no role in the crime,” he added.