His blood-stained body in the parked taxi was noticed by the passersby, who informed the Kandaghat police. 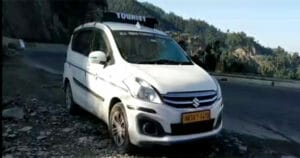 The taxi parked on the Kandaghat-Shimla road.

A Delhi resident was found shot dead in a white Ertiga taxi found parked on the Kandaghat-Shimla national highway near Dhayarighat on Tuesday morning.

His blood-stained body in the parked taxi was noticed by the passersby, who informed the Kandaghat police.

Additional SP Solan Ashok Verma said the deceased had been identified as Vachit Khan, a resident of Delhi.

A team of forensic science experts from State Forensic Science Lab, Junga, was requisitioned on the spot to collect evidence. Further probe is under way.