Dharampur-Kasauli road caves in due to heavy rain : The Tribune India

Dharampur-Kasauli road caves in due to heavy rain 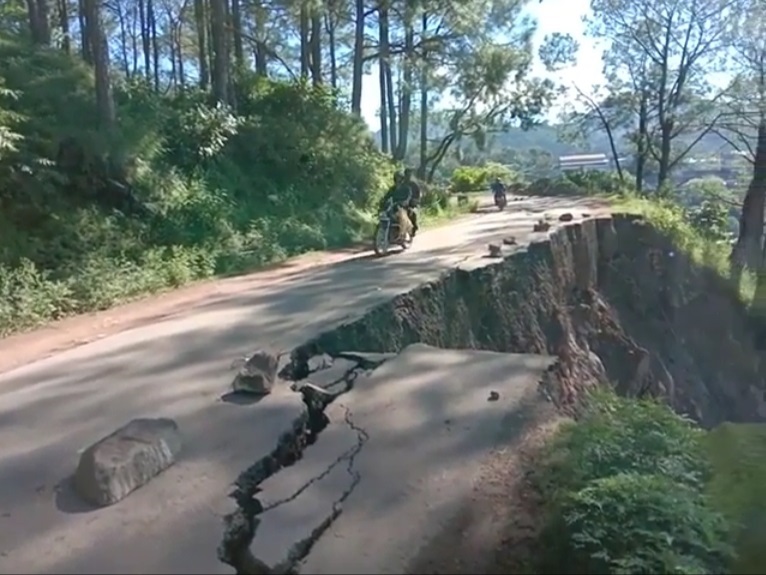 The stretch of Dharampur-Kasauli road that caved in. Tribune Photo

The road leading from Dharampur to Kasauli was closed for vehicular traffic as a 50-m stretch caved in yesterday evening.

The road had been showing signs of damage when the hill lying below it had been excavated, leading to erosion of its base. Incessant rains in the last few days worsened the condition of the road as its base became shallow and gave way.

The Public Works Department (PWD) deputed its staff to repair and create a passage for motorists on the Kasauli-Dharampur road. A single lane was made operational for traffic which helped the tourists to pass through, though vehicles were also diverted through the Sukki Jodi-Sanawar route.

Being an extended weekend, tourists made a beeline for Kasauli. “Though this road was gradually sinking for the past one-and-a-half year, little was done to contain the damage by the PWD,” said Ajay, a daily commuter.

Vishal Bhardwaj, Assistant Engineer, PWD, who was overseeing the restoration work, stated that the road had been made functional by excavating a portion of the hill. An earth-excavation machine had also been stationed there round the clock. He further informed that a retaining wall, 15 to 20m high, would be constructed to repair the road.