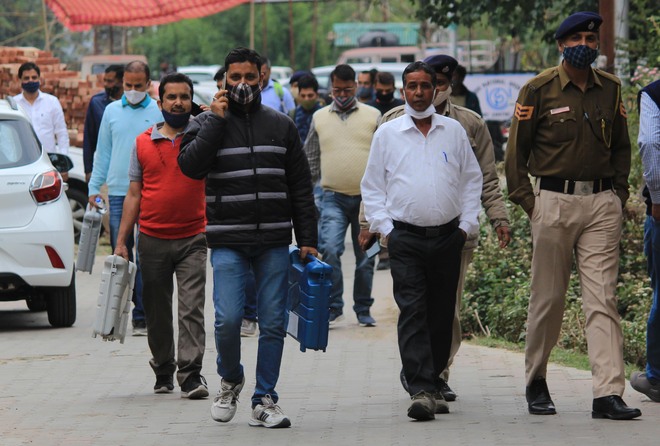 The staff on election duty at Dharamsala on Tuesday.

The campaigning for the Dharamsala MC elections that are scheduled to go for polling tomorrow ended yesterday evening. In their zeal to win the elections, both the Congress and the BJP have promised the moon to people of Dharamsala in their vision documents released during the campaign.

The Congress vision document that was guided by former minister and AICC secretary Sudhir Sharma promised to bring up Funicular railway to connect Charan Khad area of lower Dharamsala with Bhagsu area of Upper Dharamsala. He also promised Skyways project for the city.

The vision document left many wondering about what was Funicular railway. It is a transportation system that uses cable-driven cars to connect points along a steep incline. A funicular uses two counterbalanced passenger cars attached to the opposite ends of the same cable, which is looped over a pulley at the upper end of a track. In this system two cars move in concert: as one ascends, the other descends simultaneously, Presently, it was functional in developed countries and the USA, the UK and Turkey.

The Skyways is a state-of-the-art technology developed by Russian scientist in which people are transported through wire-hanged cable cars. The transport system is being implemented in Dubai.

However, the promises have left many wondering how these ambitious projects could be implemented in Dharamsala where many roads have been pending construction due to petty disputes with local landowners and forest clearances. It was also alleged that how Skyways project that involved an investment of about Rs 500 crore would be viable in a city such as Dharamsala, which has a population of just about 50,000 and receives floating population of tourists only during summer months.

Sudhir Sharma, however, says that during his stint as Minister for Town and Country Planning an MoU was signed with a company that was willing to bring up Skyways at its own cost to Dharamsala.

The BJP, on the other hand, in its vision document has promised to create parking in all wards of Dharamsala and increasing parking places in the city by five times. Though the party has made the promise it has left many wondering from where will the party find places for constructing parking in each ward. Many areas of Dharamsala, especially tourist spots such as McLeodganj, Bhagsunag and Dharamkot, face parking blues during the tourist season.

Interestingly, the last parking lot was created in the McLeodganj area on the temple road during the stint of the Congress rule in the state. In the last three year-rule of the present BJP government no new parking has been created in the city. The promise to create parking places in all wards of Dharamsala has left many wondering how BJP would achieve that target in about one-and-a-half year stint in power before the state again goes to polls.

The BJP has made a promise to make process of issuing no objection certificates (NOC) for various works time bound and transparent. Hundreds of hoteliers in Dharamsala have been waiting for getting their completion certificates from the local Municipal Corporation for many months and in some cases even years. The corporation authorities are blaming the delay on the shortage of staff.

The BJP government has not provided additional staff to the Dharamsala Municipal Corporation or the Smart City project despite various requests made by the corporation. Now, it remains to be seen if the government keeps up its promise of providing additional staff for corporation and the Smart City project so that processes of issuing no objection certificates can be fast paced.