Work to be completed by December-end, says XEN 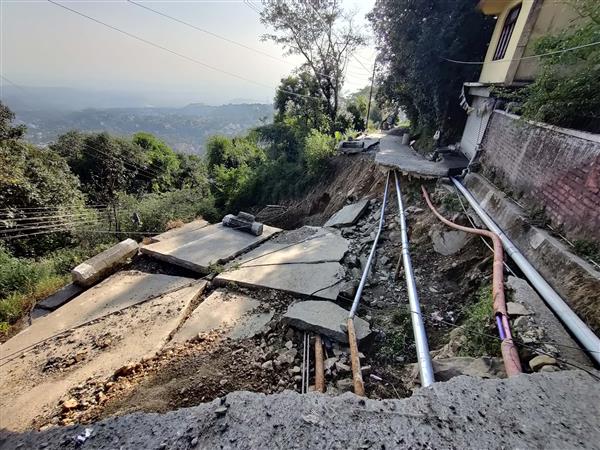 The Khara Danda road, which was damaged due to a landslide in August, has not been repaired yet. Photo: Kamaljeet.

The Khara Danda road from Dharamsala to McLeodganj had sunk in August after a portion was damaged due to a massive landslide. It has been three months since the road caved in but the work to restore it is yet to begin.

The residents of the Khara Danda road area and taxi operators, who used the road to reach McLeodganj, have criticised the state government and the district administration for not repairing the damaged portion of the road.

Rakesh Sharma, a resident, said the access to many houses on the road has been blocked since the road was damaged.

It has been three months and many people have not been able to take cars out of their houses. Ailing old people residing on the road have to walk uphill to go to doctors. It was unfortunate that work for the repair of the caved in portion of the road has not been started.

Sanjeev Kumar, a hotelier, said it was a sad state of affairs that despite being the hub of tourism in Kangra region, the roads leading to McLeodganj are in a poor state. The government or the PWD department has not shown any urgency in getting the damaged road repaired. The poor infrastructure would hit tourism in the area, he said.

Besides the Khara Danda road, the work for construction of main road from Dharamsala to McLeodganj has been progressing at a snail’s pace.

It had been about three years since the construction work was started by the national highways departments. The hotel and tourism industry of the area has been demanding that the construction of roads leading to McLeodganj should be expedited.