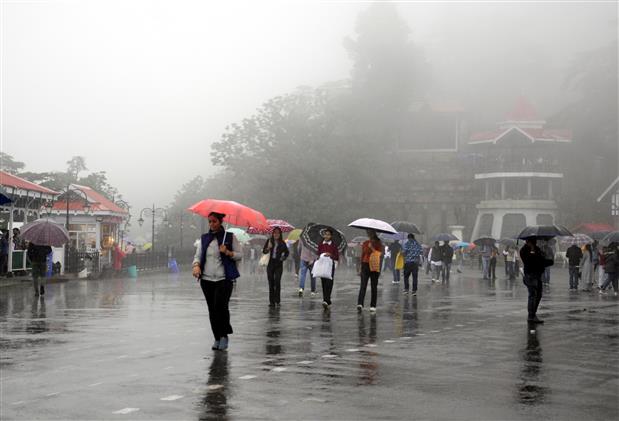 Fog engulfs the Ridge during a rain spell in Shimla on Sunday. Photo: Lalit Kumar

The MeT office has cautioned of moderate to high risk of flash floods in Chamba, Kangra, Lahaul and Spiti, Kullu, Shimla, Sirmaur, Mandi and Hamirpur districts in the next 24 hours.

The rain-related incidents have claimed 384 lives while 711 persons have been injured. The state has suffered a loss to the tune of Rs 2,097 crore during the ongoing monsoon season. As many as 81 road accidents, 69 flash floods 87 landslides and 14 cloudbursts have been reported so far.

About 181 houses were completely damaged while 864 were partially damaged and loss to private property was estimated at Rs 22.8 crore. The Public Works Department has suffered a loss of Rs 989 crore followed by the Jal Shakti Vibhag

(Rs 919 crore) and the electricity department (Rs 36.4 crore.) As many as 38 roads were still closed and 460 transformers were damaged.

Fog engulfed Shimla and suburbs and the visibility was reduced to a few metres. The local meteorological office has predicted a wet spell in the region till October 1.