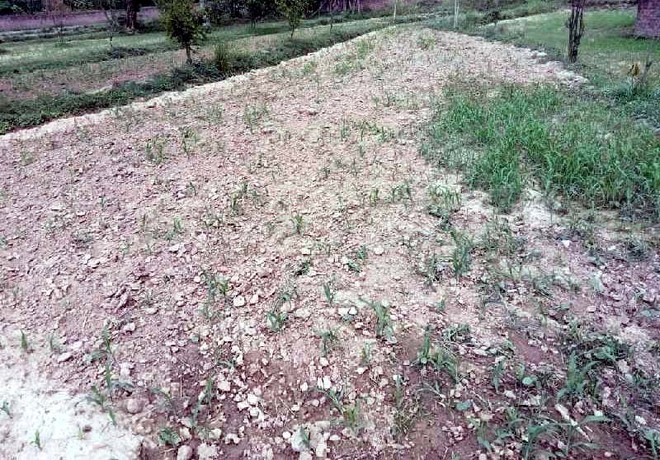 A cultivated field drying up in the absence of showers in Nurpur. Tribune photo

Farmers and fruit growers in lower Kangra district are a worried lot as the ongoing prolonged dry spell has not only hampered the sowing of rabi crops, but also hit citrus fruit cash crops.

Farmers have ploughed and prepared their fields for rabi crops but in the absence of rain and soil moisture, they are unable to sow their crops.

Some farmers, who sowed wheat crops in the end of November expecting rainfall during the first fortnight of December, are likely to incur losses. The maximum agrarian land in the area is rainfed and farmers are dependent on rainwater as they have no irrigation facilities.

According to official information, farmers cultivate wheat crops in around 9,850 hectares and maize and paddy in 4,670 and 5,892 hectares.

Diwan Singh and Subhash Singh of Kopra, Ranjit of Kherian and Kamal Sharma of Sadwan said the farming was dependent on rain and if the existing dry spell conditions persisted, their hopes of cultivating their fields would be dashed to the ground.

Usually, farmers start sowing the crop in the first week of November but they have not been able to do the same for want of timely showers. Experts say that if rain delays, it will hit farm produce.

The dry spell has also adversely hit citrus fruit crops like orange, kinnow and galgal. In the absence of rain and continuing drought-like condition, neither the fruit has developed in size, nor has it acquired proper shape so far.

However, orange and kinnow fruits are entering the markets but these are not sweet, failing to attract consumers.