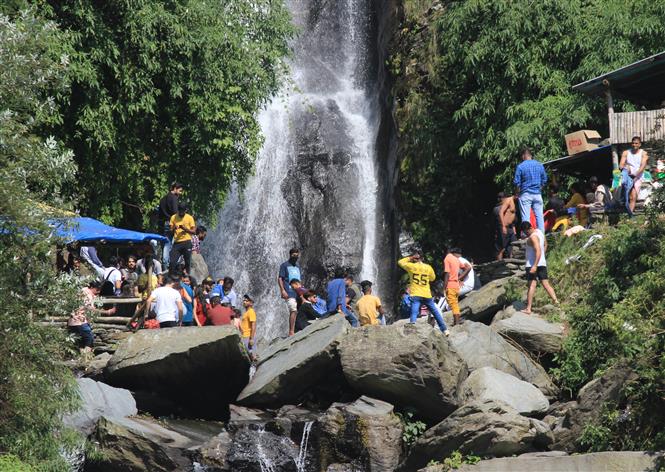 The Bhagsu waterfall in McLeodganj is a big tourist attraction.

Dharamsala is losing its tourist attractions — Bhagsu waterfall and Dal Lake — to ‘unscientific approach’ of the local authorities.

The Bhagsu waterfall, which was the main tourist attraction in Dharamsala city, has dried up. Water is available only during the monsoons. After the monsoon months, the fall dries up as the IPH Department and Army authorities pick up water from the source of the waterfall.

Similarly, the Dal Lake, another major tourist spot, has dried up due to unscientific removal of silt from its base. Now the lake dries up just after monsoons and then looks like a mud pool.

As per the information collected by The Tribune, about 12 lakh litres of water was being lifted daily for various water supply schemes of the Army and the IPH Department from the stream feeding the Bhagsu waterfall. This leaves almost nothing in the stream to create a waterfall. The quantity of water being lifted has increased over the past decade, adversely affecting its flow.

Sarvan Thakur, executive engineer, IPH Department, Dharamsala, said the Army authorities pick water from the stream feeding the Bhagsu waterfall through two six-inch pipes. “We have also laid four pipes through which water is sourced from the same stream. Recently, to cope up with the shortage of water, we added two more two-inch pipes to pick water,” he added.

Sanjeev Gandhi, general secretary of the Smart City Dharamsala Hotel and Restaurant Association, said the hoteliers had requested the district administration to lift water from the area below the waterfall and not from its source. The drying up of the waterfall has spoiled the natural landscape of the area, he rued.

Satish Sharma, a local environmentalist, said the drying up of the waterfall and the Dal Lake is an illustration of the poor management of precious natural resources. It is a sad state of affairs that tourist spots are losing their sheen due to unscientific approach in their handling, he added.

Kangra Deputy Commissioner Nipun Jindal said a committee had been formed to restore the Dal Lake to its previous glory. A meeting would be held with the Army and IPH authorities to maintain some flow in the Bhagsu waterfall, he added.