Dues not cleared, HRTC to halt service on October 18 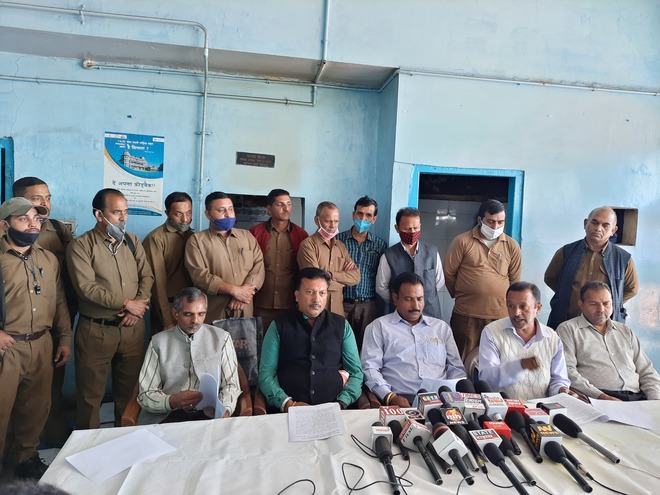 The HRTC staff at conference in Shimla on Wednesday.

The Himachal Road Transport Corporation’s (HRTC) 3000-plus bus fleet can come to a screeching halt on October 18 due to a standoff between the HRTC management and employees over the non-payment of allowances for the past four years.

“If the HRTC management doesn’t call us for talks until October 17, we will go for a day’s strike on October 18. Depending on the management and the government’s response, we can take even harsher steps post the one-day strike,” said Mann Singh Thakur, president of the Joint Coordination Committee (JCC) of the HRTC employees.

The HRTC employees have been demanding release of their pending allowances for the last two months. “The pending emoluments of the current employees and retirees have risen to Rs 582 crore over the last four years. While the government owes Rs 382 crore in the form of DA, IR, and night allowance to current employees, the pending allowances of the retirees are also over Rs 200 crore,” said Khemender Gupta, JCC secretary.

The government and the management have become indifferent to our plight and are pushing us into launching an agitation. —Khemender Gupta, JCC secretary

“We have been waiting patiently all these years for the management and government to start releasing our dues. Unfortunately, the government and the management have become totally indifferent to our plight and are pushing us into launching an agitation,” said Gupta.

The JCC office-bearers further alleged that the management and the government were citing the model code of conduct as an excuse to not call them for talks or release their dues. “As we are not demanding anything new, it does not fall under the purview of model code of conduct. We have waited enough, we will not relent until the management talks to us and addresses our issues,” said Gupta.

The other demands of the JCC include giving HRTC the status of roadways, action against officials indulging in corruption, bringing piecemeal workers on contract, etc.