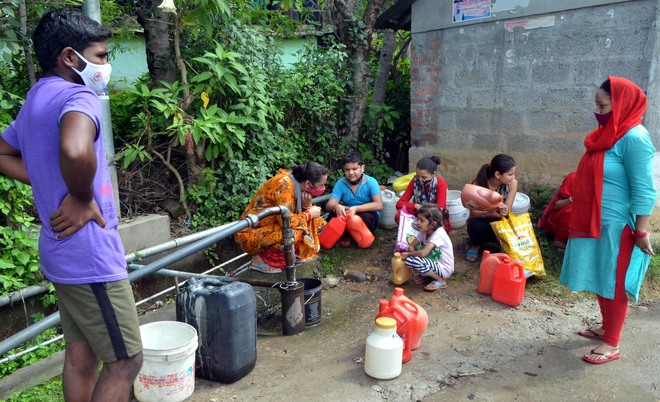 People wait in a queue to get drinking water in Dharamsala on Tuesday. photo: Kamaljeet

Many areas in Dharamsala have been without water since July 12, the day when a flash flood hit the region.

Many areas are getting water supply for just one hour after every two days. In some areas of McLeodganj, people claim that they are collecting rainwater from their roofs to take a bath.

Naresh Sharma, a resident of Ram Nagar, alleged that the fear of disease outbreak loomed in the area, as people were not flushing their toilets. He had not seen such an acute water shortage for decades, he said.

Vikas, a resident of Naddi, said they had not got water supply for the past eight days. The people were ordering tankers and using bottled water for drinking purpose, which was proving costly.

Executive Engineer Sarvan Thakur said most water schemes to Naddi had been repaired. He, however, admitted that there was rationing of water in many areas due to various reasons.

He said many water schemes were again damaged after heavy rain yesterday. The muddy water in the streams had choked the filters, resulting in the shortage of the water supply.

The Executive Engineer said the worst-affected areas were Ram Nagar and Shyam Nagar where water was being supplied every alternate day.

He said the water was supplied to Naddi from the Gajj river. The water heads in the river were damaged due to the flash flood. The river was in spate so technicians had not been able to cross the river and repair the water supply schemes, Thakur said.

In Chatru, a transformer was washed away, disrupting the power supply. The power was restored yesterday, he said.

The flash flood had damaged 23 of the 38 water schemes in Dharamsala.