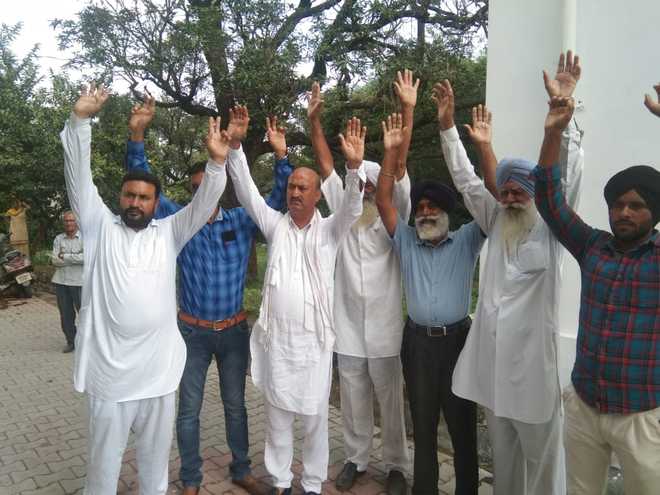 Farmers of the Mand area in Fatehpur hold a demonstration.

Problems being faced by farmers of borders areas in Kangra district may affect the prospects of the BJP in the forthcoming Fatehpur Assembly byelection. The farmers of the border areas of Kangra district, including the Fatehpur constituency, grow paddy on the banks of the Beas.

Earlier, the farmers used to sell their produce in the mandis of adjoining areas of Punjab. But now the Punjab Government has banned the entry of paddy from other states into its mandis. On the intervention of the state government, the Food Corporation of India (FCI) has decided to open three mandis in Kangra from October 16 to procure paddy.

Recently, when BJP candidate Baldev Thakur went to campaign in the Mand area of Fatehpur, the paddy farmers opposed him said that he should come only when the procurement of paddy begins on October 16.

Another problem that the paddy farmers of Kangra are facing is that there is no rice sheller in the district. Hence even private mills will not procure paddy.

Sumesh Singh, a resident of the Mand area, said that the farmers in the border areas of the state were already resorting to distress sale of paddy at Rs 1,200 to Rs 1,400 per quintal to middlemen against the MSP of Rs 1,940 per quintal.

Kangra Deputy Commissioner Nipun Jindal said that earlier the FCI was not ready to procure paddy in the district, as there was no rice shelling mill there. However, when the government intervened the FCI decided to set up three procurement centres at Fatehpur, Riali and Indora. The paddy procurement would start on October 16, he adds.

The issue of the Pong Dam oustees has been a political issue in Kangra district for quite some time. Rajan Sushant, a former BJP MP, who is now contesting as Independent candidate, rose to prominence due to the agitations for the rights of the Pong Dam oustees. Recently, when the Forest Department stopped farmers from growing crops on the banks of the Pong Dam, Sushant and even local BJP legislators opposed the decision tooth and nail.

Jindal said that as per the rules, the registration of revenue papers on the e-portal was mandatory to sell paddy at the FCI centre. FCI officials were not available for comments despite repeated calls on their mobile phones.