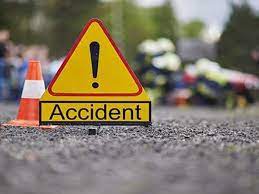 A five-year-old girl and her aunt were grievously injured after falling off a tractor and being hit by its trailer at the Giri river in Paonta Sahib around 9.30 am today.

The girl received head injuries and was referred to Nahan medical college after being given preliminary treatment at the Paonta Sahib Civil Hospital.

Deputy Superintendent of Police (DSP) Bir Bahadur said the toddler and her aunt, Pinky, were going towards the Giri to work when tractor driver Pawan offered them a lift this morning.

The tractor was on its way to the Giri from a stone crusher at Rampurghat in the town.

Pinky sat on the mud guard next to the driver’s seat with the girl on her lap. The tractor was being driven recklessly and even after being asked by Pinky to slow down, Pawan failed did not heed to her advice, the DSP said. The tractor jolted when a big boulder came under its wheel on the uneven track and the duo fell on the rocky riverbed. They were hit by the tractor’s trailer before landing on the rocky surface and were injured.

A case under Section 279 and 337 of the IPC has been registered against the driver and further probe was underway, Bahadur added.