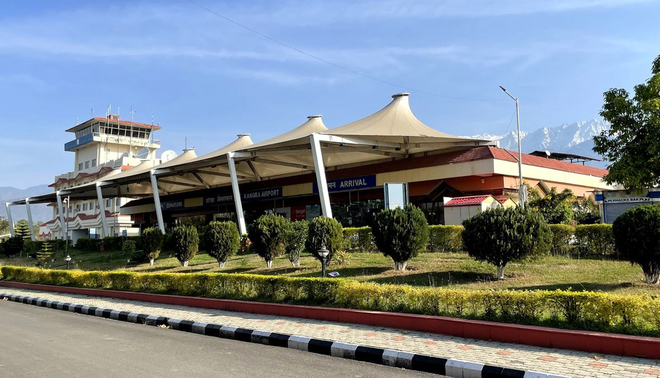 The state government is awaiting security clearance for a bridge over the Manji river for the expansion of the Gaggal airport.

The state government is awaiting security clearance for a bridge over the Manji river for the expansion of the Gaggal airport.

Sources say that the report for security clearance of the proposed bridge was sent to the Union Ministry for Civil Aviation in August but no response had been received since then. The river passes through Gaggal where the airport is located.

The sources say that the airstrip needs to be expanded from the present length of 1,372 metres to 3,010 metres for the airport expansion. A bridge has been proposed over the river which can handle the weight of bigger planes. Union ministry experts will evaluate whether the bridge will be viable for the expansion of the airport or not.

They say that the land acquisition process for airport expansion can only begin after security clearance for the bridge. As per the state government’s proposal, 144 hectares are required, including 120 hectares private land. The remaining 24 hectares is government land, much of which is under the possession of individuals.

Deputy Commissioner, Nipun Jindal says the security clearance from the Union ministry is awaited and it is likely to be received soon.

Another bottleneck for the expansion of the airport is the non-availability of funds. The Finance Commission had announced Rs 400 crore for the project. However, as per the report prepared by revenue officials of Kangra, about Rs 500 crore would be required for the acquisition of 120 hectares.

Chief Minister Jai Ram Thakur during a recent visit to Dharamsala had said that the state government was persuading the Union Government for more funds.

The Central Government has listed the Gaggal airport for disinvestment till March 2022. The airport is the busiest airport of the state receiving five flights daily, including four between Dharamsala and Delhi and one between Chandigarh and Delhi.

Lack of funds another bottleneck