Gave old pension scheme in Rajasthan, will give in Himachal Pradesh: Ashok Gehlot : The Tribune India

Gave old pension scheme in Rajasthan, will give in Himachal Pradesh: Ashok Gehlot 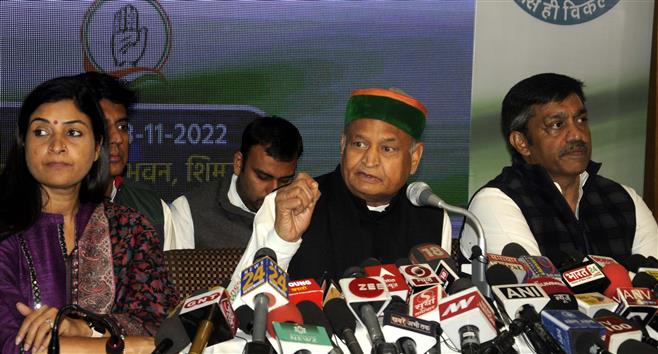 Gehlot, while addressing a press conference here, said 238 employees had started getting the old pension in Rajasthan and gradually it would be restored.

“If our regime has done it, let there be no doubt that it will be done in Himachal too,” said Gehlot, allaying fears of financial implications of the decision. State Congress chief Pratibha Singh and AICC spokesperson Alka Lamba were also present.

Gehlot accused the BJP of trying to mislead the people of Himachal by distorting facts. “The reality is that the BJP doesn’t wish to restore the OPS and for that it is making false statements. I feel the demand for the OPS is valid as it is social security during old age for which employees dedicate their whole lives,” he said.

He said the demand for the OPS should be viewed from a humanitarian perspective. “I urge Prime Minister Modi to take note of this aspect and announce the OPS for the country. I spoke to Jai Ramji twice but he did not take any positive action,” he revealed. He also termed the setting up of a committee on the OPS by three states, including Himachal, a mere eyewash to placate employees.