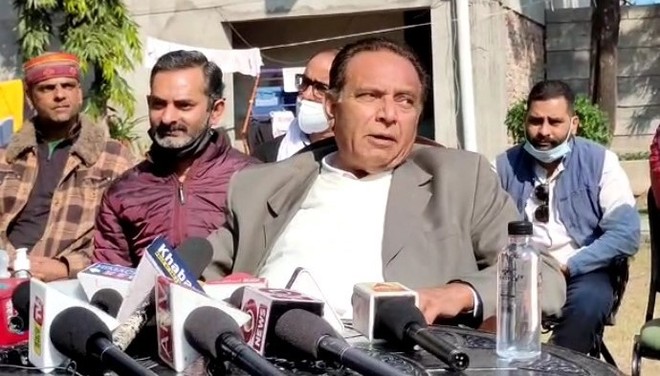 Senior Congress leader GS Bali, while speaking with mediapersons at Kangra today, alleged that about 50 per cent of the foundation stones laid by Chief Minister Jai Ram Thakur in the Nagrota Bagwan Assembly constituency yesterday were of old projects sanctioned and executed by the previous Congress government.

Bali said that the administrative block of Rajiv Gandhi Engineering College was built during the previous Congress government and the Chief Minister inaugurated it once again. It seems that officials were not briefing him on the projects that had been executed earlier and were rather misguiding him, he added.

He alleged that blocks of Pharmacy College, a block of Government Senior Secondary School at Samloti, the combined office building project for which the work was started in 2016 and a full budget provision of Rs 4 crore was made, and the ITI at Serathana had already been inaugurated. Various roads and bridges that the Chief Minister inaugurated yesterday were started by the previous Congress government with full budgetary provisions. The BJP government was falsely claiming credit for these projects by inaugurating them again, he added.

Bali said that the audio clip and the social media message in which Health Department officials had given directions to ASHA workers to be present in a rally of the Chief Minister at Nagrota Bagwan had gone viral. ASHA workers were at present involved in containing coronavirus in the state. The fact that they were withdrawn from Covid duty and asked to attend a political rally during the pandemic times was a very serious issue and the government should come clean on it, he added.

Bali said that it was unfortunate that a Union minister had to ask the state government to make the bureaucracy work in the state. It was a matter of shame that the CUHP project could not be executed though the BJP has governments both at the Centre and in the state.

He alleged that serious charges had been made regarding the violation of UGC norms in recruitment done in the CUHP. The Congress would soon come out with facts regarding violations in recruitment and may also move court over the issue.