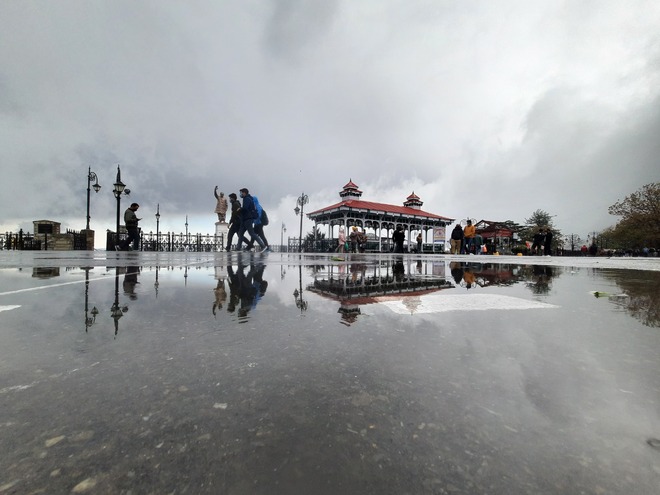 Shadows of passers-by reflect in a puddle after rainfall in Shimla on Sunday. Photo Amit Kanwar

Shimla, its surroundings and some other places in mid hills were lashed by a severe hailstorm and sharp showers, bringing normal life to a halt today.

Dark clouds overcast the sky and it was darkness at noon, forcing people to rush indoors. The hailstorm that lasted for about 90 minutes, disrupted normal life and affected traffic as vehicles had to move at a very slow pace with headlights on during the day.

Widespread moderate rain occurred across the state and Baldwara was the wettest in the region with 45 mm of rain followed by Narkanda and Bharari 18 mm, Bajaura 16 mm, Sundernagar and Rajgarh 12 mm, Guler 11 mm, Kumarsein 8 mm, Kumarsein 8 mm, Dehra Gopipur 7mm and Shimla 6 mm.

There was no appreciable change in the minimum and maximum temperatures and Keylong and Kalpa recorded a high of 16.7 degree and 20 degree while Una was the hottest with a high of 38.4 degree, followed by Nahan 33.8 degree, Shimla 23.5 degree and Manali 25 degree.