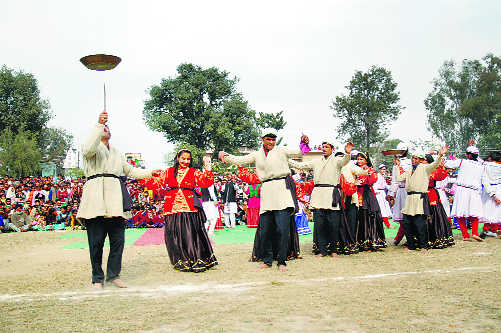 The decision of the BJP-led government at the Centre to fulfil the 55-year-old demand of the backward villagers of Hattee community residing in Trans-Giri tract in Sirmaur district seems to be the synonym of a long-cherished dream becoming a reality. However, it is only the inclusion of Giripar in Schedule 5 as ‘Schedule Areas’ which will bring real benefits.

The Hattee community, excluding the Scheduled Castes, have been accorded the ST Status but real task pertains to inclusion of Trans-Giri tract in 5th Schedule as Schedule Areas which will ensure their entitlement to get a special development funds from the Centre.

Senior officials disclosed that if percentage of all castes, excluding SCs, crosses 50 per cent, it is only then that it can be easily declared as schedule areas which will precede a detailed proposal of caste-wise population from the state government. As per latest data available with Sirmaur district Social Welfare Department, the population of non-SC castes exceeds 68.3 per cent which is a positive factor.

According to constitutional experts in Delhi, monsoon session was adjourned sine die on August 8 and winter session might begin after imposition of model code of conduct. Hence, Centre may issue the notification by adopting ordinance route. It will later warrant the adoption of Bill in Parliament in six weeks from the date of start of session of Lok Sabha and Rajya Sabha.

Experts clarified that present case of inclusion of Hattee community of Sirmaur district in 5th Schedule does not amount to a constitutional amendment hence it empowers the President of India to issue an ordinance if the Parliament is not in session.

Second, the analysts say that over five decades old demand was accepted owing to several factors, including desperate attempt of the ruling party to retain power in Himachal Pradesh under the Mission Repeat. No political party could break the jinx of not coming back to power in Himachal which makes this task extremely difficult for the BJP. In this complex scenario, BJP feels that the Hattee community will support it in the assembly elections in November this year.

Third, the Centre has inserted an amendment clause in the Cabinet memo which excludes Scheduled Castes of Giripar areas from ST status to preserve their constitutional rights of 15 per cent reservations, thereby nullifying their resentment otherwise they could have voted against BJP nominees during the assembly elections.

A race for cornering the credit may gain momentum during the Assembly elections and the ruling party will make efforts to put Congress party on the mat for doing injustice with the deserving people of Giripar areas. Political observers feel that Modi was state incharge of the BJP in Himachal and as such had full sympathy with the cause of the Hattee community which could have contributed in overcoming the bureaucratic hurdles to take this issue to a logical end.

Dr Amin Chand, president, Central Hattee Samiti, general secretary Kundan Singh Shastri and other members of the organization have expressed their gratitude to every warrior who contributed in the success of this movement.

On the contrary, the Congress has planned to counter BJP’s possible onslaught with the help of documents which exhibit the efforts of six-time chief minister, Late Virbhadra Singh who was responsible for a detailed report a way back in 2016 which was prepared by the institute of tribal development in Himachal university.