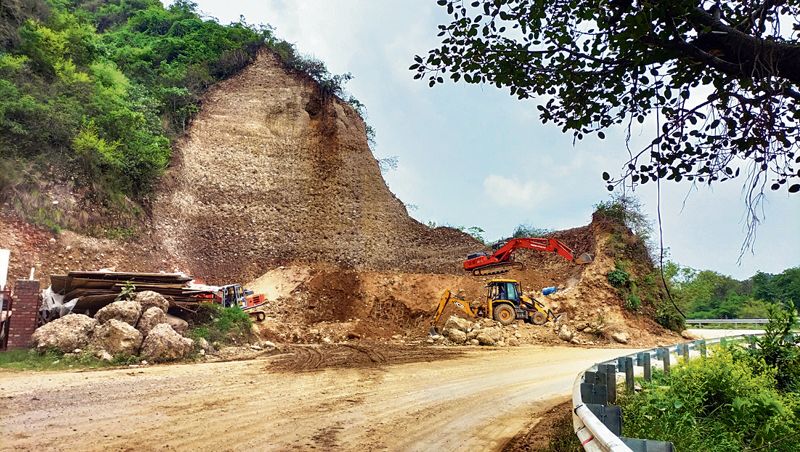 A hill being levelled in Himachal Pradesh. - File photo

Himachal Pradesh Chief Secretary RD Dhiman has sought a report from the national highways department and various state government offices over the illegal and unscientific cutting and levelling of hills by people owning land along roads in Kangra. The action follows complaints by several residents, who have blamed the illegal cutting for massive landslides, particularly during the rainy season, along the national highways.

The landslips have caused extensive damage to private and public properties in Dharamsala and its surrounding areas. One of the complainants, Gopal Puri, in a letter to the Chief Secretary, Chief Minister Jai Ram Thakur and Union Minister for Road Transport and Highways Nitin Gadkari, had alleged that the national highways department was not taking any action against such people. The complainant had alleged that the illegal cutting of hills was not only damaging the national highways, but also posed a threat to the commuters.

According to rules, no construction can be carried out within 24 metres (about 80 feet) from the national highway. And for levelling any hill up to 25 feet in height, a special permission has to be sought from the forest and public works departments.

Kangra Deputy Commissioner Nipun Jindal said he would write to the national highway and public works departments for action against the violators.

Professor AK Mahajan, a geological expert from the Central University of Himachal Pradesh in Dharamsala, said most of the landslides that occurred in and around Dharamsala this monsoon were “manmade disasters”. “A landslide near Chambi on the Pathankot-Mandi highway occurred due to the unscientific cutting of hills,” he said.