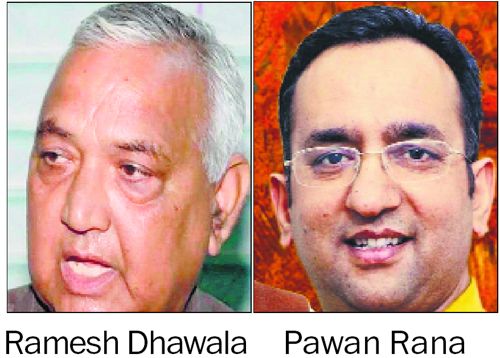 Stung by the outburst of former minister and four-time MLA Ramesh Dhawala, the BJP today got into the damage control mode as Kangra legislators came out strongly in defence of state organizational secretary Pawan Rana, who is in the firing line.

As expected, Dhawala’s tirade against Rana was met with sharp criticism with chances of the belligerent Jawalamukhi MLA facing disciplinary action seeming inevitable. In the absence of a new BJP state president, state BJP spokesperson Randhir Sharma issued warning to everyone, including Dhawala.

If Ramesh Dhawala had issues, he should have raised these at an appropriate party forum and not gone to the press. The BJP is a party with discipline and action will be taken against anybody taking party matters to the media.

Sharma said the party had taken serious note of Dhawala targeting a party functionary who had dedicated his entire life to the party and was not involved in active politics. He added the BJP was a party with discipline and action would be taken against anybody taking party matters to the media.

With chances of bickering within the ruling party intensifying, loyalists of Chief Minister Jai Ram Thakur swung into action to give an impression that Dhawala was the lone MLA who had a grouse and the rest all legislators and ministers were happy. “The issue has been blown out of proportion and misconstrued as it was solely an administrative meeting to discuss schemes and utilize unspent money,” said Rakesh Pathania.

He rubbished speculation about bickering and said nobody took Rana’s name, who is responsible for strengthening the organization and many of the MLAs owe their victories to him. He said all the MLAs are with the Chief Minister and working towards Mission Repeat.

Outgoing state party president Rajeev Bindal also came out strongly in defence of Rana. “The BJP is a party with an ideology which does not function for an individual nor with the motive of grabbing power,” said Bindal. He said Rana had dedicated his life to the social service and the organization. He further clarified that all decisions pertaining to appointments in the party organization are made collectively and blaming an individual for it was unfair.

Vishal Neharia, newly elected MLA from Dharamsala,, criticised Dhawala saying that his outburst is nothing new and he is in the habit of making such allegations. Pathania refrained from making any remarks against Dhawala and said what he said could be his personal grouse, limited to Jawalamukhi and not any other part of Kangra.