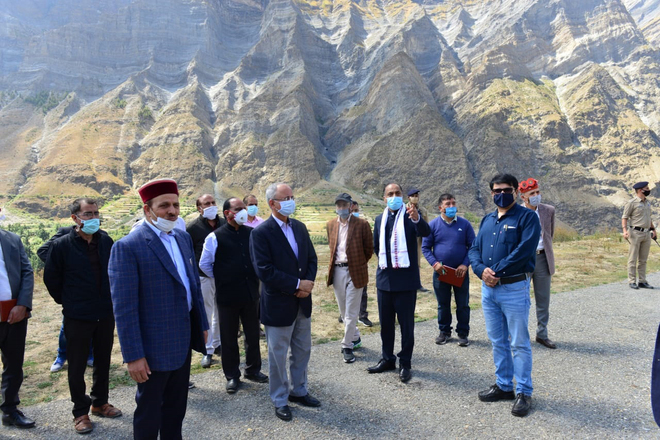 Chief Minister Jai Ram Thakur reviews preparations for the inauguration ceremony of the Atal Tunnel with officers of Lahaul & Spiti at Keylong on Wednesday. Tribune photo

Chief Minister Jai Ram Thakur today chaired a meeting with officers of Lahaul and Spiti district at Keylong to review the preparations for the inauguration of the Atal Tunnel at Rohtang by Prime Minister Narendra Modi on October 3.

Thakur said that the tunnel was ready and Prime Minister Narendra Modi would visit Lahaul to inaugurate it.

He added that the tunnel was an important achievement for the nation from the strategic point of view. Besides, it would also contribute to the socio-economic development of the people of the area. He added that a new opportunity would emerge in the agriculture, tourism and horticulture sectors with the commencement of the tunnel, which would change the economy of the tribal district.

The Chief Minister said that before the construction of the tunnel, the Lahaul valley remained closed for vehicular movement for about six months due to bad weather conditions but now the people of the valley would be able to travel through the year. “The construction of the tunnel has fulfilled the long-pending dream of the people of Lahaul. There is renewed enthusiasm development in the entire region,” he added.

He said that it was due to the farsightedness of former Prime Minister Atal Bihari Vajpayee that the Rohtang tunnel had been constructed. He directed the officers concerned to make special arrangements for the visit of the VVIPs, keeping in view the SOPs for Covid-19.

Technical Education Minister Ram Lal Markanda welcomed the Chief Minister and other dignitaries and gave out the details of the event. He said that due to the untiring efforts of the present government, the work of the tunnel had been completed.

added that the previous Congress government did not work with sincerity for forest clearance, delaying the work. Chief Secretary Anil Khachi, and DGP Sanjay Kundu also attended the meeting.