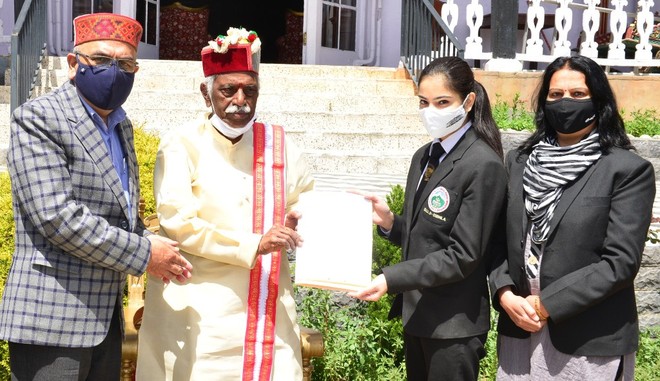 Governor Bandaru Dattatreya honoured NSS volunteer Ashwarya Kashyap, a student of Himachal Pradesh University, Institute of Legal Studies, Chaura Maidan, Shimla, at Raj Bhawan on Wednesday for participating in the National Youth Parliament-2021 held in New Delhi in January. The Governor also presented an appreciation certificate to Mrinal Joshi, a student of Government College Sanjauli, Shimla. It was received by programme officer, NSS, Seema Kashyap on her behalf. Congratulating Ashwarya, the Governor said that it was a matter of pride that a girl from Himachal had achieved this level of success with her extraordinary talent, which was also an inspiration for others. He expressed satisfaction that NSS volunteers from Himachal, besides rendering selfless community services, also take part in different services. He asked the NSS authorities to promote the services in a big way so that more and more students take part in the activities.

The ABVP on Wednesday paid tributes to 22 soldiers, who died in the recent Chhattisgarh Naxal attack, and staged a protest outside the DC office. The NSUI also paid tributes to the martyrs at HPU. The ABVP alleged that Naxalism was inspired by China and has become a threat to the internal security of the country. It demanded that the Army be equipped with modern arms.

The SFI on Wednesday submitted a memorandum to the Registrar, HPU, demanding that the university should conduct the exams for Class III posts for which it had invited applications last year. The SFI said that the university had charged Rs 1,200 to Rs 2,000 for applying for these posts, but had not conducted the exams yet. The SFI also demanded the creation of a common room for students.