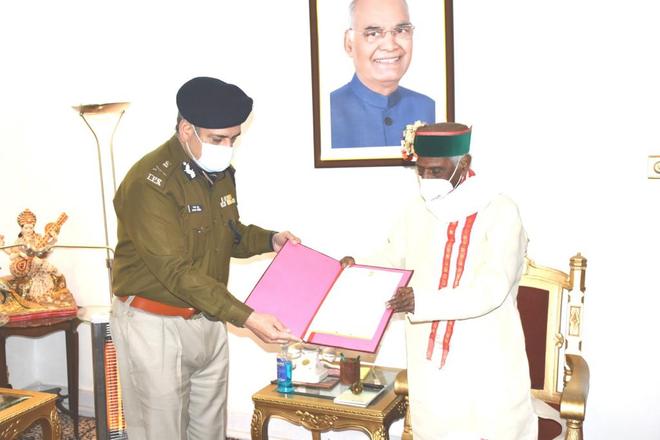 DGP Sanjay Kundu receives a commendation letter from Governor Bhandaru Dattatreya at the Raj Bhawan in Shimla on Saturday.

Governor Bandaru Dattatreya today lauded the role of the police in checking crime against women and children in the state by adopting new and innovative initiatives.

He presented a commendation letter to DGP Sanjay Kundu for his efforts in addressing the issue, at Raj Bhawan here. “I compliment you for taking initiatives to make Himachal Pradesh a safe and secure place for women and children,” he said.

“The Police Department has taken steps to improve cooperation and collaboration among all line departments, including Education, Social Justice and Empowerment and Information Technology, to ensure the safety of women and children,” the letter reads.

The Governor said that the Himachal Police were also working out robust projects under the Nirbhaya Scheme with definitive outcomes to improve the levels of safety among women and children. These include the National Mahila Police Volunteer scheme, regular awareness campaigns, increasing capacity of the state police to address cyber crime, raising cyber awareness and installation of CCTV cameras, he added.

He specially lauded Kundu’s initiative to start Register No. 26 (Register for Sexual Offenders) in all police stations, which has led to better monitoring of crime against women and children. The Governor said other steps such as starting registers of suicide, unidentified bodies and missing women and children would go a long way in improving the safety and security of women and children.