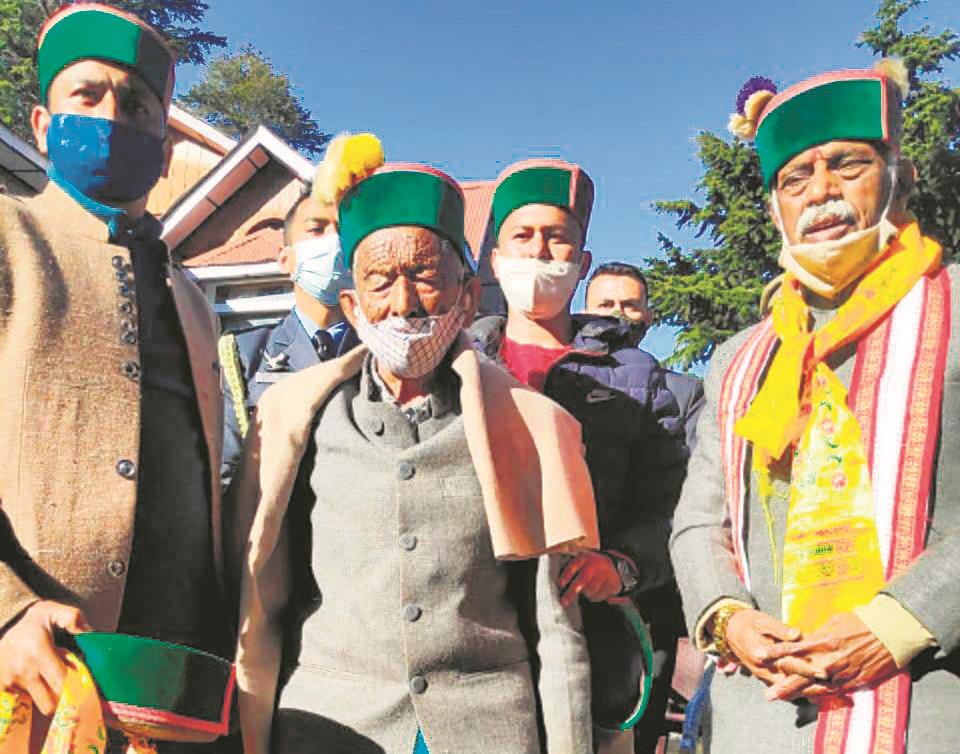 Himachal Governor Bandaru Dattatreya met Shyam Saran Negi, the first voter of Independent India, at the Kalpa Circuit House in Kinnaur district today. Negi (104) is a native of Kalpa and he reached the Circuit House to welcome the Governor.

The Governor thanked Negi for spreading awareness amongst voters and his contribution to strengthening democracy. He honoured Negi and said that even at this age he was an active citizen, which is a motivation for others.

Negi said that he was a fan of Prime Minister Narendra Modi and the Central Government was performing well under his leadership. Later, the Governor performed puja at the ancient temple of Kalpa and took a round of apple orchards. He also interacted with local people and listened to their grievances.

Dattatreya, who is on a two-day visit to Kinnaur, matched steps with the folk troupe of Kinnaur. He said that his trip to Kinnaur was a unique experience and he felt that coming to Himachal was worthwhile.

The Governor said that Kinnaur has its own distinct identity and the local culture was truly exquisite. The affinity seen among the people of the area could not be witnessed in any other part of the country.

He said that the future generation should be made aware of its rich culture, so that they could take pride of their culture. He added that a society survives as long as it remains attached to its culture. The mountains, forests and rivers were the identity of the Devbhoomi. Along with culture, special attention should also be given to the conservation of nature and cleanliness.

The Governor congratulated the newly elected public representatives of the recent PRI elections.

He said that the new responsibility of development was on them, and asked them to contribute significantly to the development of villages.