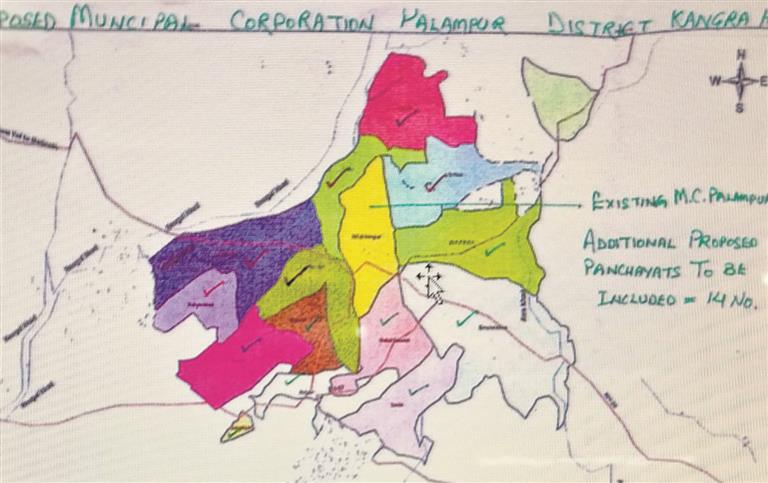 The proposed map of the Municipal Corporation of Palampur.

The Himachal Pradesh Government today issued a notification for the formation of Municipal Corporation at Palampur. Besides Palampur, the state government had also approved MC for the Solan and Mandi towns.

He said the existing MC at Palampur was set up in 1952. Since then, its limits were never extended. Because of vast urbanisation Palampur had emerged as one of the fast growing towns of the state. Therefore, the state government had given its consent to set up the MC at Palampur.

He said in the absence of proper planning, various parts of satellite areas had turned into slums and residents were facing problems like disposal of garbage, sewerage, street lights and drainage system. He said soon, the state government would call for objections from the public.

Last month, around 20 NGOs of the town and a number of social bodies had passed a joint resolution urging Chief Minister Jai Ram Thakur for early formation of the MC at Palampur. The Congress had also welcomed the formation of the Municipal Corporation.

Shanta Kumar, senior BJP leader who played a key role in the formation of MC at Palampur, hailed the decision of the state government and thanked the Chief Minister for honoring his request.

He said now Palampur town would witness new development which will usher in a new era.