About 12 people were missing in remote Boh valley 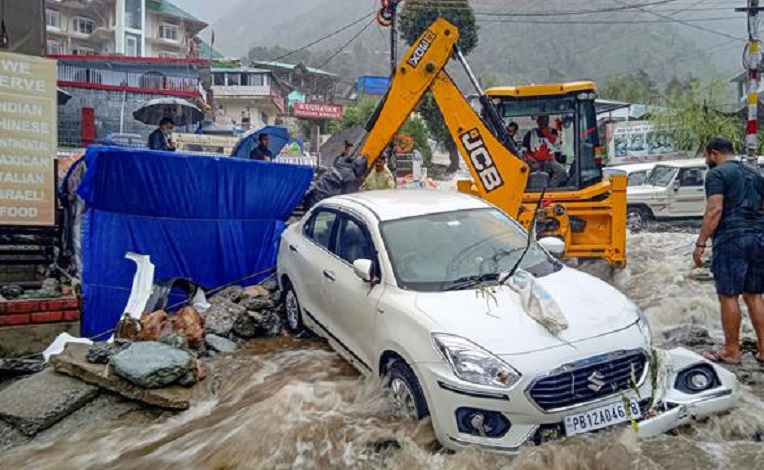 An earthmover machine removes a vehicle stuck in flood water near Bhagsunag, as heavy rains lashed the area after a cloudburst in McLeodganj near Dharamshala, Monday, July 12, 2021. PTI

The first heavy monsoon rain in Dharamsala region has led to a flash flood in Bhagsunag area and lower Dharamsala and a massive landslide in Boh valley located about 30 kms from here.

As per the reports, about 12 people were missing in remote Boh valley as a massive landslide dumped thousands of tons of debris over their houses.

About five houses and their inmates are expected to be trapped under debris in Boh valley.

SP Kangra, Vimukt Ranjan who was heading to the spot said that one body has been recovered as exact number of deceased could only be ascertained after the rescue operations were over.

The sources here said though the landslide occurred at about 10.30 am the rescue teams had not reached the spot till the filing of this report.

The rescue teams could not reach as the road to the area was blocked due to landslides.

About six JCB machines had been deployed to clear the road to the place where the landslide had destroyed five houses.

Kewal Singh Pathania, HPCC general secretary, said that about five to six hours delay in arrival of rescue teams could have cost loss of life for many people trapped under debris.

Earlier in the morning, water breached the banks of natural drain and gushed on the streets in Bhagsunag.

The gushing water from the drain damaged vehicles of some tourists parked in the streets.

The locals blamed the encroachment on drain by some hoteliers for the flash flood in the area.

They alleged that the natural drain that was more than 20 feet wide had been narrowed to less than 10 feet at places due to encroachments by some hoteliers.

The narrowing of drain led to water gushing on to streets and damage to vehicles. There was no loss of property in Bhagsunag area.

The Manji river, which was in full spate due to heavy rain throughout the night, caused damage to public and private property in Bagli village about seven kms downhill from Dharamsala.

The flooded Manji river washed away four houses and two shops located on its banks in Bagli village.

The district administration got vacated houses and commercial establishments located on the banks of river Manji.

The slum dwellers residing on the banks of river Bagli were also shifted to a government school in the area.

The road leading from Bagli to Sheela Chowk was also washed away due to flash flood in Manji river disrupting traffic in the area.

The flash flood in Manji river and Bhagsunag were more manmade than a natural catastrophe.

People in Dharamsala region have been encroaching into riverbeds while the authorities turn a blind eye to the developments. The encroachments on river beds were to primary cause of loss to property.

Deputy Commissioner, Kangra, Nipun Jindal when contacted said the exact amount of damage to private and public property due to flash flood can only be gauged after a survey. Those affected have been given compensation as per government norms.

Deputy Commissioner Dr Nipun Jindal said, “Instructions have also been given to people to not go to sensitive places prone to landslides. Some people have also been shifted to safer places due to flood conditions in some areas of the district.”

Officials have been directed to complete relief and rehabilitation immediately, he said, adding that control rooms have also been set up and steps have also been taken to make the weather forecast available to people.

Jindal said according to the Meteorological Department forecast, heavy rain on July 13 as well as from July 14 to 16 has been predicted.

Keeping this in mind, orders have been issued under the Disaster Management Act 2005 to district officers of all the departments in Kangra district to remain alert.

The president of hotel association, Ashwani Bamba, said that all bookings in Bhagsunag have been cancelled after news of flash flood in the area.