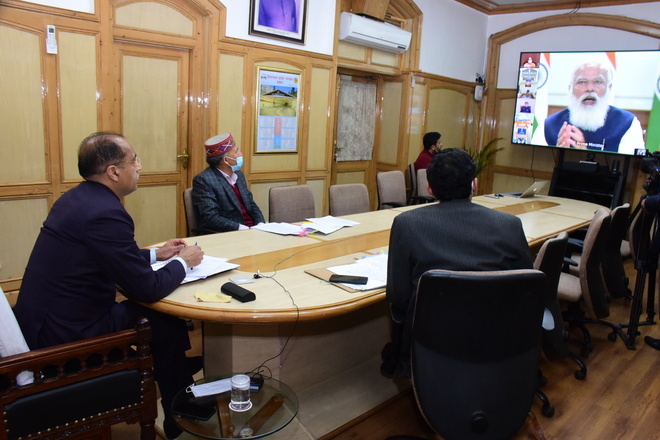 Being a hilly state, more funds and resources are required to create infrastructure in Himachal Pradesh as compared to other states, said Chief Minister Jai Ram Thakur while virtually participating in the sixth meeting of the Governing Council of NITI Aayog, chaired by Prime Minister Narendra Modi, today.

He said the state government was laying stress on making Himachal a tourist hub of the country but the lack of a good air and rail connectivity was acting as the biggest bottleneck. He urged the Prime Minister to give approval and to provide assistance for the construction of a greenfield airport in Mandi and the expansion of the Kangra airport.

He said with the completion of the Atal Tunnel in Rohtang in record time, there had been a lot of improvement in the livelihood of people in Lahaul and Pangi valleys, as thousands of tourists have turned towards this area. He said about 5,000 vehicles were crossing the tunnel daily. He said tourists were going to Lahaul and Spiti to witness the Snow Festival in Keylong valley which would never have been possible without this tunnel.

He said the Baddi area could boast of being the biggest pharma hub of Asia and the state had aggressively made a bid for a bulk drug pharma park. He said the HP Government had also bid for setting up a medical devices manufacturing park and an electronic manufacturing hub. He urged the PM that these parks be approved for the state

He said Himachal had emerged as the first state in the country to receive four tranches under the Jal Jeevan Mission.