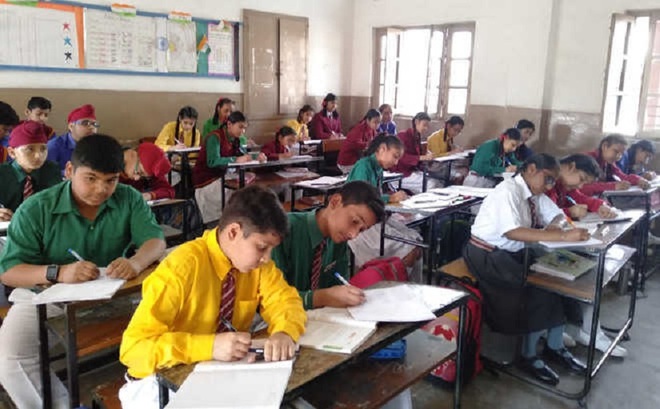 The decision of the Himachal Pradesh Board of School Education to hold first and second-term examinations for students of Class IX to XII in November 2021 and March 2022 under the new education policy has not gone down well with a teachers’ union and managements of some private schools.

The initiative, on the pattern of CBSE, is welcome but the timing is wrong as the decision should have come at the start of the academic session and the first term should have been held in August. However, the notification in this regard has been issued September 29, towards the end of the session, Virender Chauhan, president of the Himachal Government Teachers Union (HGTU), said.

The harsh topography of the state does not allow offline classes in winter closing schools, which constitute about 35 per cent of the total government schools in the state, Chauhan stated.

“We have submitted a memorandum urging the state government to start term examinations from the next session, as preparing 50 per cent syllabus in four months would put pressure on students,” he said, adding that if the Board and the government was adamant on bringing about the change in the current session itself, the examination held in September should be considered as the first term.

Meanwhile, managements of some private school affiliated with the Board rue that the syllabus has been selected randomly and not by sequence and now there is no time to teach the units selected for first-term examinations. The government schools were following “Har Ghar Pathshala” programme but the private schools were teaching in sequence and random selection of units had become a problem for them, they stated.

However, Suresh Kumar Soni, chairman of the Board, said the decision had been taken after consultation with the stakeholders and a majority of the teacher unions had backed the decision, except Virender Chauhan’s HGTU.

A virtual meeting would be held tomorrow with all associations and their queries would be addressed by experts and their valuable suggestions would be incorporated, he said. The syllabus had been selected by the teachers and a tentative date-sheet has also been released, Soni added.