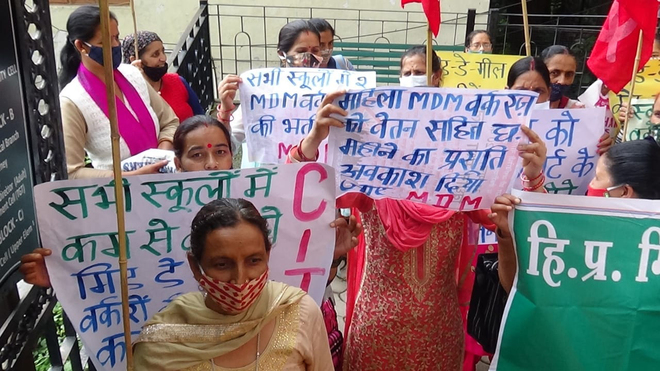 Himachal Pradesh Mid-day Meal Workers Union has demanded that their monthly salary of Rs 2,600 per month be hiked to Rs 9,000. Alleging that the salary of mid-day meal workers has remained unchanged since 2009, the union said its members were totally sidelined as there was no provision for leave, EPF and medical facilities for them.

Union secretary Himi Devi, while participating in the protest outside Education Directorate today, said the minimum salary of the mid-day meal worker should be fixed at Rs 9,000 per month. “Mid-day meal workers perform all kinds of duties. So they should be appointed as multi-task workers and regularised. The union also demanded that they should get two dresses in a year, Rs 4 lakh as gratuity on retirement and some insurance scheme,” she said.

The union also alleged that the Central government was conspiring to privatise the mid-day meal scheme, which was evident in the reducing budget for the scheme.