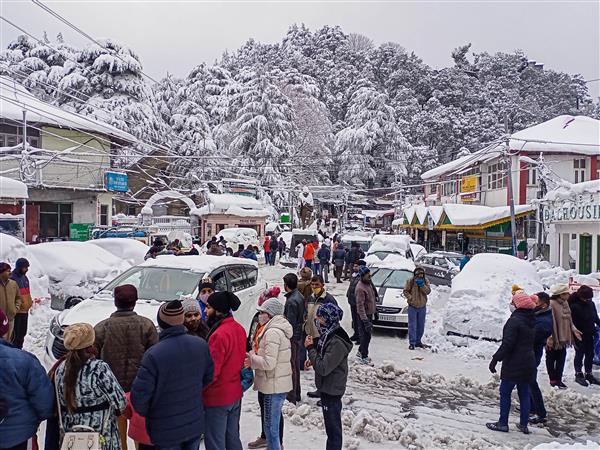 After recent snowfall in several places in Himachal Pradesh, people from various parts of the country especially from neighbouring Punjab, Haryana and Chandigarh are thronging its tourist hotspots to usher in the New Year.

Most hotels in major tourist areas including Shimla, Manali, Dalhousie and Kufri were fully booked from Christmas till December 27, and they are also expected to be totally occupied from December 31 till January 3, said Mohinder Seth, president of an association of Himachal Pradesh tourism industry stakeholders.

Seth said the state government allowed the entry of tourists in July after an over three-month ban due to the pandemic, but the tourist hotspots of the hill state have witnessed the highest number of tourists on Christmas.

The tourism boom after the recent snowfall on December 27 comes at the end of a year that saw little or no business even at the state's highly popular holiday resorts due to the coronavirus pandemic.

The entire hospitality industry in the state was shut for almost eight months due to the pandemic and has recently gained momentum in last month of the year.

As per government-owned Himachal Pradesh Tourism Development Corporation (HPTDC) officials, almost all their properties are running on 100 per cent occupancy which is a remarkable feat amid the current pandemic situation.

However, while the state's tourism industry is looking forward to doing brisk business in the coming weeks, the sharp spike in tourist arrivals has led to fears of increased spread of COVID-19.

Shimla Superintendent of Police Mohit Chawla said the police and administration are taking all steps to control the spread of the virus and all COVID-related protocols are being followed.

Anyone found to be violating precautionary norms especially not wearing masks will be fined Rs 1,000, he said.

There is also curfew in place from 10 PM to 6 AM in four districts—Shimla, Kullu, Kangra and Mandi—that are popular among tourists.

Meanwhile, the police has divided Shimla city into seven sectors for security and eight sectors for traffic purposes to control the crowds of tourists on New Year, Chawla said.

A strict vigil will also be kept on the tourists through CCTV cameras and drones, he added.

In Manali in Kullu district, the Atal Tunnel has become the biggest attraction for tourists since its opening in October. The Mall Road of Manali is abuzz with tourists and the local shops are doing brisk business.

President of Travel Agent Association of Himachal Pradesh Budhi Prakash Thakur told PTI that after a dull response in October and November, the arrival of tourists has increased recently.

“If the government gives a little bit more attention towards infrastructure development and better air connectivity, tourism in Manali will reach a higher level,” he said.

With the onset of New Year accompanied by heavy snowfall, the tourist influx to Dalhousie hill station in Chamba district has increased considerably.

There is around 65 percent occupancy in hotels and other tourist-related establishments operating in this area, said Manoj Chadda, Chief Patron, Federation of Hotels and Restaurants Association Dalhousie.

He, however, said the heavy snowfall in this region has become an obstacle to vehicular traffic at many points, thereby reducing the number of tourists in the area.

HPTDC Dalhousie-Chamba tourist circuit manager Vikas Datta said tourism occupancy in HPTDC hotels is a hundred percent and tourists from different parts of the country are enjoying the snowfall in Khajjiar and Dalhousie.