The breeding farm will be set up in Una district's Burnoh 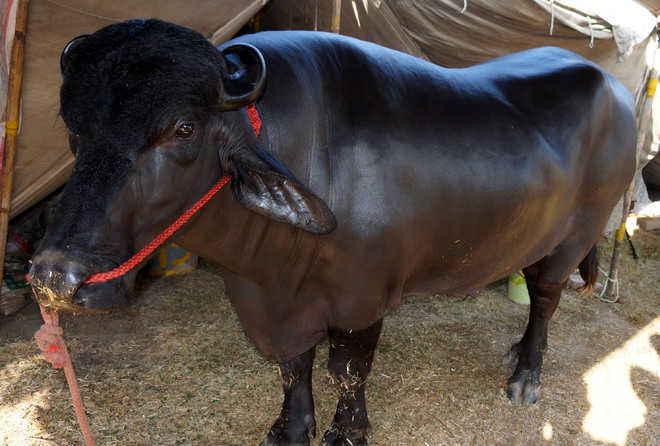 The Murrah buffalo is the most preferred choice of many dairy farmers. Tribune file photo

The Himachal Pradesh government will be setting up a Central-funded Murrah buffalo farm with an outlay of Rs 506.45 lakh for the genetic upgrading and dairy extension services, state Animal Husbandry Minister Virender Kanwar said on Sunday.

The breeding farm, which will produce the high-quality fertile and disease-free bovine stock, will be set up by the Himachal Pradesh Livestock and Poultry Development Board in Burnoh in Una district.

The Murrah buffalo is the most preferred choice of many dairy farmers.

The Minister said the aim of the farm is to produce high-yielding calves to enhance the overall milk production.

The native Murrah breed, nationally recognized as an indigenous by the National Bureau of Animal Genetic Resources in Karnal, is of its distinct characteristics and constitutes 359,979 (55 per cent) of the total 646,565 buffalo population in the state.

The state will set up three ultra-modern sheds at an initial cost of Rs 75 lakh to rear 50 high-genetic buffaloes, comprising 30 adult and 20 heifers.

The freshly calved high pedigreed 30 adult female buffaloes in first or second lactation and 20 disease-free heifers will be purchased from government farms.

The state will high grade semen to farmers and the surplus will be supplied to neighbouring states -- Haryana, Punjab, Delhi and Uttar Pradesh -- to meet the growing demand, said Kanwar.

The Murrah buffalo farm will be equipped with scientific waste management and rainwater harvesting facilities and a fodder farm.

To reduce the operational cost of farms, own forage and silage preparation from green fodder crops will be practiced, said the minister.

The fodder production will be undertaken with a cost of Rs 15 lakh to reduce the cost of rearing the animals so as to make the project economically viable and the dung is to be used as organic fertilizer manure for green fodder cultivation.

Surplus green fodder is proposed to be utilized for silage production to be used in lean periods, he added.