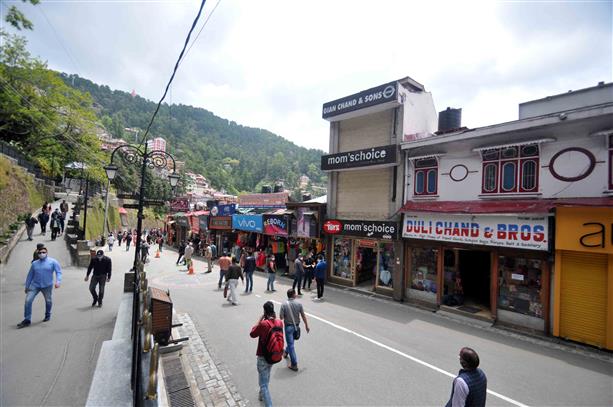 A view of Mall Road in Shimla on Wednesday. Tribune photo: Amit Kanwar.

The government’s decision to throw open its doors for all and sundry amidst a steep surge in Covid cases and rising fatality rate has the industry and tourism sector hopeful but the general public is very critical of the move, which they feel is most ill timed.

Even as Himachal has crossed the 10,000 positive cases mark and has a death toll of 89, the decision to open its borders has been taken by the state government under pressure from the Centre.

Himachal had till yesterday stuck to the decision of a mandatory registration on the e-covid portal to enter the state on the pretext of facilitating contact tracing in case anyone tests positive.

“We welcome the decision to lift all restrictions, including opening of bars but then all shops and markets too should be allowed to keep open as was the norm before March when Covid outbreak took place,” remarked  Sanjay Sood, president of Shimla Hotel Association.

He said despite doing away with all restrictions, the revival of tourism industry may not happen as early as is being expected as we need to tread cautiously in view of rising cases.

“The decision to open the borders is very ill timed as it is now that the actual surge has started in Himachal and the decision has made us, the local population vulnerable to infection from all over the country,” said Kalpana Thakur, a housewife.

She said at least the registration system helped in regulating entry into the state but now the past gains too would be lost.

In fact, residents of Mandi, Kangra and Sirmour had been demanding lockdown and social media was abuzz with such speculation.

Chief Minister Jai Ram Thakur defended the move by stating that the decision is in line with Centre’s move of opening up.

“The fatality rate in Himachal is 0.8 as compared to the national figure of 1.64. In Punjab this figure is 2.98 so we are quite comfortable and all proper arrangements have been made to ensure proper detection and treatment of positive cases,” asserted Chief Minister Jai Ram Thakur.

He said the economy has to get back on track and livelihoods have to be created.

Ambivalent response was received from the industry for opening the state’s border as some investors welcomed the move while others were worried at the spiralling Covid cases and lack of preparedness of the state government.

Rakesh Bansal, senior vice president, Parwanoo Industries Association, said, “It is  a welcome move as it will facilitate smooth operations of the industry which has been incurring losses in one form or the other owing to the restrictions. Thrust should be on prevention and taking precautions and avoiding crowing of people. There is no point curtailing economic activities as one has to live with this pandemic.”

With the industrial clusters like Baddi-Barotiwala-Nalagarh, Parwanoo, Kala Amb and Paonta Sahib registering maximum Covid cases, a word of caution has been sounded by some investors.

Surinder Jain, president, HP Corrugation Box Manufacturers Association, said, “The step will ease the industry as several maintenance-related activities had been put on hold due to restriction on the entry of people but it was also a potential threat as number of cases could rise.”

“At a time when the health minister has admitted that they were entering the community spread stage, this decision would not auger well for the state as well as the locals residing in the industrial clusters,” remarked Jain.

As part of its initiative aimed at economic revival, Himachal Government has thrown open its borders as from now onwards no pass or registration would be required to enter the state, be it for those belonging to the state or tourists.

Thakur said even though the number of Covid cases had crossed 10,000 but the decision was in line with Centre’s appeal for unlock and revival of economic activities.

“Henceforth, anybody can enter the state freely without any restriction even though we are still not resuming inter-state public transport,” he said sharing the decisions taken by the Cabinet last night.

He said tourists can now enter the state freely and they would not be required to carry a negative Covid report and five days mandatory hotel booking as was the condition earlier.

He said this had been done so that the tourism industry, which had been severely hit by the Covid pandemic, could pick up. Till now registration with the concerned Deputy Commissioner was mandatory to facilitate contact tracing in case anyone tests positive.