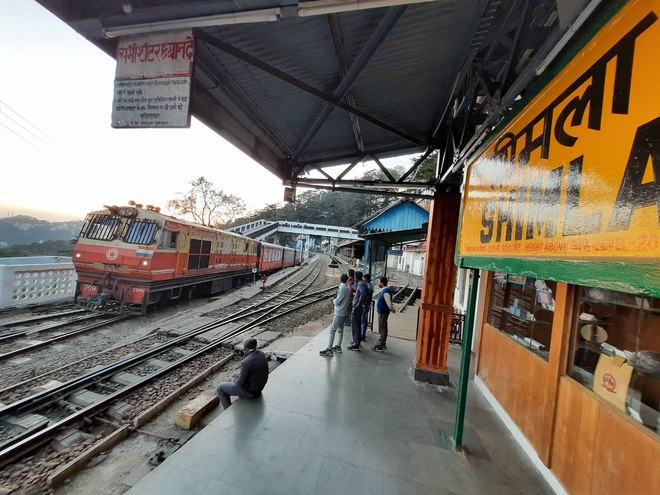 The last train had plied on this track on March 24, after which movement of trains was suspended following the Covid pandemic.

The Railway authorities have specially introduced holiday special trains in view of the festive season. The train started from Kalka at 12:10 pm today. It reached Kandaghat around 3:30 pm from where it takes two more hours for the onward journey till Shimla, informed an official.

He said since general reservation had been put on hold owing to Covid restrictions, lack of awareness about online booking led to merely three people travelling today. Only chair car and first class passengers make online bookings. The staff is hoping to receive more passengers tomorrow, when the train leaves for Kalka from Shimla at 10:40 am.

More holiday trains would ply on this track till November 30 and two trains will ply from Kalka and Shimla tomorrow, respectively, an official said.

Trains plying on this track generally witness a good rush, especially in the festive and holiday season. Officials said more people were expected to avail the facility once they were aware about the trains having resumed functioning on this track.

Built in 1903, this toy train ride is one of India’s most incredible feats of engineering, covering a staggering 102 tunnels, 864 bridges and 919 stunning curves.

Spanning some 60 miles, the toy train is said to be one of the most scenic railway journeys in India. And, with a route that encompasses a vast display of awe-inspiring landscapes, it’s easy to see why.

This journey runs on a narrow gauge from Kalka to Shimla, treating passengers with breathtaking views of rugged mountains, lush pine forests, waterfalls, valleys and picture-perfect hill stations along the way. The whole journey takes about five and a half hours.

The police claim the video was shared to cause communal unre...