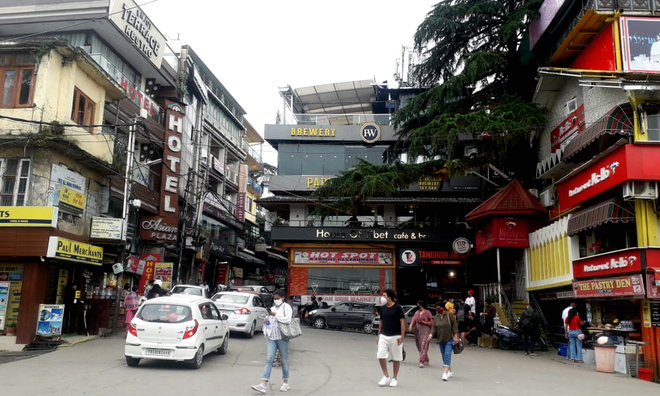 Tourists walk at the main square in McLeodganj. Photo: Kamaljeet

Tourists have started visiting McLeodganj after about six months since the lockdown was imposed. Tourist vehicles are seen again on the roads. Though most hotels have opened the doors, many famous restaurants in McLeodganj are still closed.

It’s good to see cars back in the town. Though only a few tourists have come to McLeodganj, we expect the business to pick up soon. Foreign tourists, who used to contribute significantly to the tourism in Dharamsala, are not likely to return soon.

Ashwani Bamba, president of the Upper Dharamsala Hotel and Restaurant Association, said in most hotels, 10 per cent rooms were booked this weekend. “We are getting queries from Punjab, Haryana and the Delhi NCR region. I hope the tourism will pick up again,” he said.

Ram Swaroop Sharma, another hotelier from McLeodganj, said: “It’s good to see cars back in the town. Though a few tourists have come to McLeodganj, we expect that the business will pick up soon.”

He, however, said foreign tourists, who used to contribute significantly to the tourism in Dharamsala, were not likely to return soon.

Pankaj Chadha, owner of Mcleo restaurant, said he would open the restaurant in October. It was not viable to run all operations till tourist inflow was restored.

Though most of the big restaurants have yet to be opened, some small coffee shops have started offering services to visitors.

Kuldeep Singh, a tourist from Punjab, said he was happy to visit the hills. His family was waiting eagerly to visit McLeodganj as they were fed up with the restrictions.

Tourism in Kangra district is the backbone of economy. There are about 2,000 local youths, who are operating taxis in McLeodganj.

For the past six months, they have not earned even a single penny.