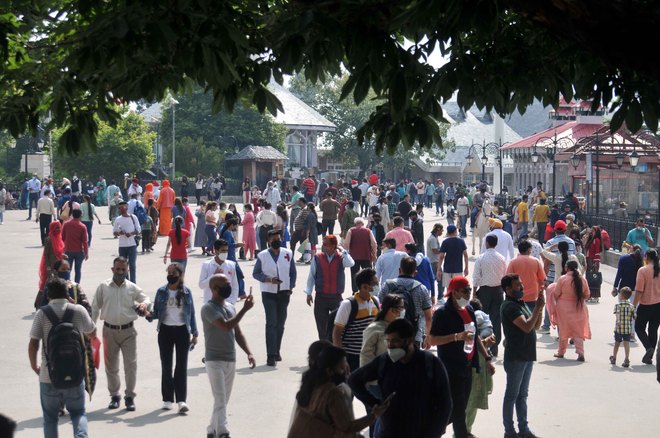 Most hotels in all major tourist destinations are packed to capacity as visitors are swarming the hills to escape the heat. According to an estimate, 2.57 lakh vehicles have entered the state within a fortnight.

Even as locals fumed with the usual traffic congestion, hoteliers couldn’t have been more happy with an average of over 18,000 vehicles entering the state daily. With the hospitality sector taking a severe beating in the last 15 months, most hotels, guest houses and homestays are witnessing high occupancy, much to their delight.

According to the police, while 1.31 lakh vehicles entered Himachal between June 13 and June 20, the number remained almost same at 1.25 lakh between June 20 and June 27. The sudden surge of visitors was witnessed as the government has lifted the condition of getting the mandatory RT PCR report and later the e-registration on the cowin portal.

“Much to our relief, the tourism sector seems to be looking up as we are getting very good occupancy. On weekends, most properties are full to capacity,” said Sanjay Sood, a local hotelier.

Echoing similar sentiments, Anil Walia, who owns a resort in Mashobra, said suddenly the state had come alive with tourists arriving from every nook and corner of the country, knocking at the doors of every hotel, guest house and homestay, be it Shimla, Manali, Dharamsala, Kinnaur, Lahaul Spiti or Dalhousie.

The beleaguered hotel industry had virtually been pushed to the brink with most gasping for survival. Having remained closed for more than a year, most feel that looking towards the government for financial help was futile. “We have to learn to run the business by the new normal, where a guest feels safe and secure amid Covid times as maintaining high levels of hygiene and cleanliness become priority number one ,” admitted a hotelier.

With the new concept of “work from the hills” catching up, many professionals are re-locating to the quaint villages in places like a remote Manali village or a hut in Dharamkot in McLeodganj. It is the rural populace which is benefiting as these professionals only want a serene setting in the laps of nature, eating the local food with no fancy cuisine, gadgets or rooms.

It is alleged that supply of illicit liquor is rampant in th...