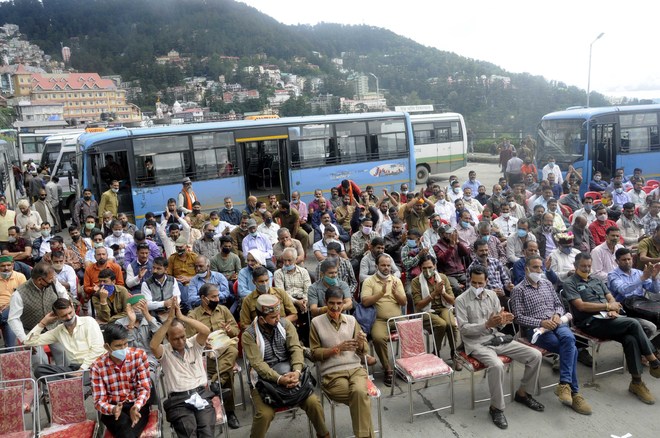 HRTC employees protest at the old bus stand in Shimla.

Employees of the Himachal Road Transport Corporation (HRTC) accused the management of withholding their arrears of Rs 500 crore and violating the agreements struck in the past during a protest held here today.

“The HRTC has not released the DA since 2018, night overtime for the past 32 months, pensions, gratuity, leave encashment and medical reimbursement,” said Khemender Gupta, secretary, Joint Coordination Committee of the HRTC employees. “The pending arrears are increasing by the day and the sense of discontent and disappointment is also increasing among the employees,” he said.

Gupta said the management was also not responding to their demand of bringing piece meal workers on a contract basis and restoring the initial salary of Rs 9,880 for the drivers.

Gupta said in case their demands were not met, the Joint Coordination Committee will hold gate meetings in all HRTC units from October 11, followed by a complete strike on October 18. — TNS