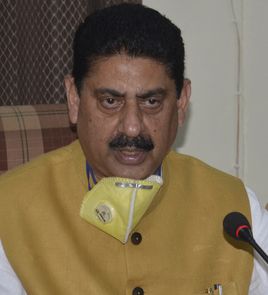 Forest Minister Rakesh Pathania said here yesterday that no mining activities would be allowed in forestlands in Himachal Pradesh and in case of any violations stringent action would be taken against the defaulters as well the officer responsible. He asked the people to reports such violation to his office.

My top priority is to check environmental degradation, particularly of forest land. The mining mafia had not even spared the forest lands and constructed illegal routes in gross violation of rules to reach the river beds for extracting mining material.

Talking to The Tribune, the forest minister said his top priority was to check environmental degradation, particularly of forest land. He said it was shocking that the mining mafia had not even spared the forestlands and constructed illegal routes in gross violation of rules to reach the river beds for extracting mining material in various parts of the state which was a serious matter.

The minister said necessary steps were being taken. Officers had been directed to plug all illegal routes made through forestlands all over state, free entire forest land from the mining mafia and initiate action against the defaulters so that valuable forest wealth was saved and environmental degradation checked.

He admitted that large-scale illegal and unscientific mining the in the state had played havoc with the nature. Mining and quarrying in Kangra valley had resulted in large-scale deforestation, landslides and flash floods. Thousands of hectares of land has been affected by the mining, quarrying and other activities in this region resulting in drastic reshaping of landscape. This had also caused huge loss to the state exchequer. Pathania said illegal mining had posed serious threat to the existence of dozens of roads, bridges, irrigation and drinking water supply schemes, local paths, village roads and cremation grounds.

He said he had taken the news reports seriously that appeared in The Tribune highlighting the impact of illegal mining in Jaisinghpur, Nurpur and other parts of the state where state authorities had turned a blind eye.