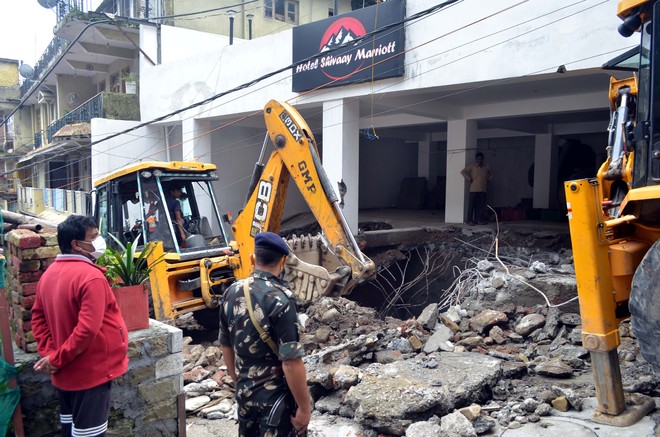 Encroachment removed by the MC at Bhagsunag in McLeodganj.

The Dharamsala Municipal Corporation today carried out a demolition drive in Bhagsunag to clear encroachments on a natural drain that resulted in flash flood on July 12. Municipal Commissioner Pradeep Thakur ordered the demolition of concrete structures built by hotel owners on the drain in the area.

Some hotel owners tried to resist the drive and entered into heated arguments with the Commissioner. They alleged that they had got the completion certificates from the MC for constructing the concrete structures on the drain and would move court.

The MC authorities and locals maintain that the encroachments caused the July 12 flood. There were reports that people dumped the construction waste in the drain that settled down in it, reducing its carrying capacity. Most locals welcomed the move. It was for the first time that the Dharamsala MC has acted proactively and carried out demolition drive days after issuing notices to the encroachers.

There had been complaints of widespread violations of building norms earlier too but the MC had just issued notices to the violators.

Though the MC had carried out a drive in Bhagsunag, there were encroachments on riverbeds in lower Dharamsala too. Some big hoteliers have put concrete slabs on the riverbeds to reach their properties.

The Commissioner said notices have been issued to those in lower Dharamsala as well.