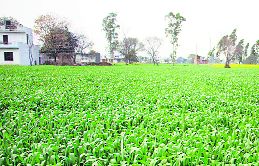 Virender Kanwar, Minister for Agriculture and Rural Development, has asked scientists to develop integrated farming models to enable farmers adopt any model as per their needs. Kanwar was addressing the gathering at the state-level farm officers’ workshop-cum-farmer scientist interface at CSK HP Agriculture University here.

The Minister for Agriculture and Rural Development says 80% seeds are purchased from outside so there is need to produce seeds of major crops within the state in association with progressive farmers.

He said since 80 per cent seeds were purchased from outside, there was need to produce seeds of major crops within the state with involvement of progressive farmers.

The minister said efforts were under way to conserve and preserve seeds of traditional crops under the Mukhyamantri Paramparagat Beej Sarankshan Yojana. He advised the farm officers to educate farmers about the proper use of chemicals and fertilisers as pesticide residue was highest in Himachal Pradesh. He said farm chemicals should be available only at registered shops and the seller should be properly trained to help stop the excessive use of chemicals. The minister asked the scientists to suggest crops for mid hill areas and also sought solution to the problem of crop damage by wild animals. The stray cattle problem will end by March as some cow sanctuaries will be made functional, he said.

Prof Harinder Kumar Chaudhary, Vice-Chancellor, detailed the major achievements of the university. He said Krishi Vigyan Kendras had initiated the work to produce seeds of wheat and mash (urd). As many as 51 programmes have been envisaged to commemorate the statehood golden jubilee and 51 krishi doots have also been selected whose photographs had been displayed in Kisan Deergha, he said.