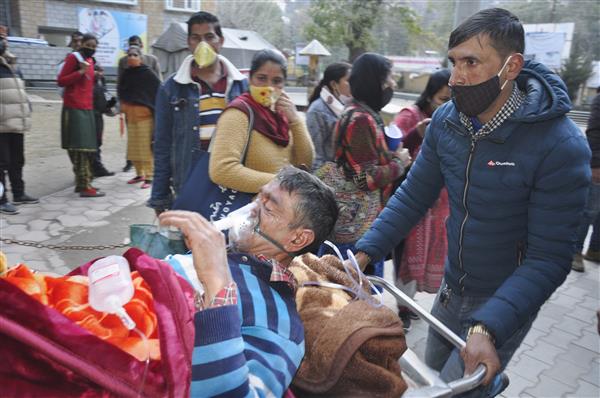 An injured being taken to a hospital in Banjar subdivision. PTI

Four persons were killed and three others injured as a JCB machine fell into a 200-metre deep gorge at Saminala, near Grahon village, in Banjar subdivision of the district today. A team of the Banjar police along with 108 ambulances rushed to the spot and started the rescue work with the help of local villagers.

He said that Penu Ram (51) of Maslehad village, and Chaman Lal and Tara Chand of Shilh village were injured and were given first aid and sent to the Civil Hospital, Banjar, in ambulances. The JCB machine was engaged to clear snow from the Banjar-Dalwahad road and all victims were labourers of the Public Works Department. He added that the reason for the accident was not yet ascertained.

The SP said the bodies were recovered with the help of local people. It took a long time to retrieve the bodies as these were not easily approachable and were lying about 200 metres in the gorge. The bodies would be handed over to the family after a postmortem examination.