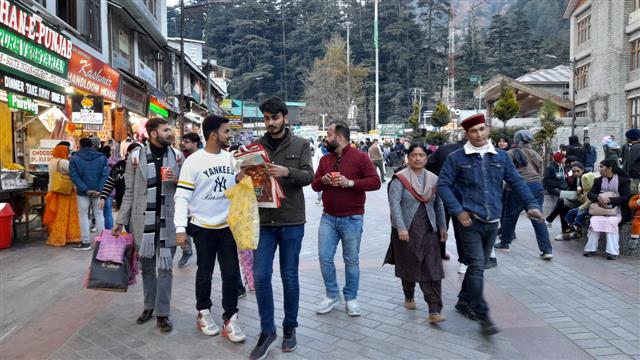 Tourists take a stroll on the Mall Road in Manali. Photo: Jai Kumar

However, many hoteliers are offering discounts up to 20% in room bookings and offering other lucrative offers to attract tourists here. They have been waiting desperately for snowfall in Manali and its surroundings which could provide impetus in the tourist influx to the area.

Anup Thakur, president of Kullu-Manali Paryatan Vikas Mandal, said, “The hoteliers in their own individual capacity are offering lucrative offers to the tourists for Christmas and New Year eve. Many of them were offering a 20% discount on bookings. We are hopeful that Manali will be packed to capacity on these two occasions.”

“It is expected that from December 15 onwards, the Kullu-Manali will witness a surge in tourist footfall, which will continue till January 10. After New Year eve, a five-day winter carnival will start in Manali like every year from January 2 to 6 for entertainment of tourists. During the winter carnival, different cultural activities are organised. It gives the chance to the tourists to get a glimpse of Himachali culture. Apart from this, various sports activities are also organised, in which men and women take active part,” he added.