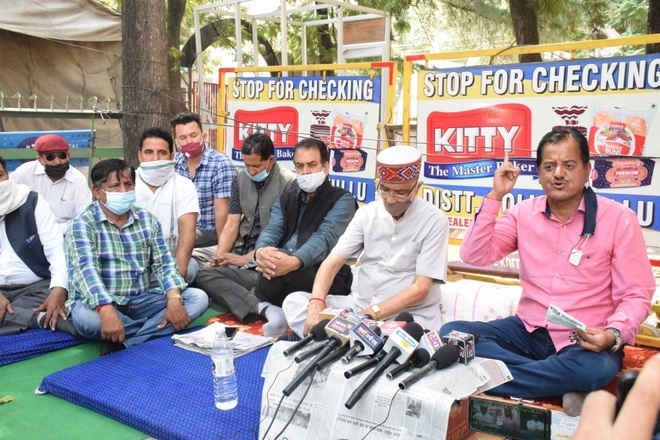 Today, around 600 Congress workers gathered throwing social distancing norms to wind and held a protest march and demonstrated outside the SP office. They were not allowed to enter into the SP’s office by the police. They raised slogans against the district administration, police, former MP Maheshwar Singh and the state government. They demanded that false FIR against Congress workers and the MLA’s son should be withdrawn and action against hooligans who unlawfully entered the premises of the MLA on September 10.

The MLA came out from the SP office premises and addressed the gathering and said that they were sitting on a dharna for the past 48 hours but nobody from the administration had turned up. He accused the police of being biased and taking unilateral action.

He said that he had timely informed the police apprehending safety concerns for his family but the police failed to provide security at his premises. He added that no legal action was taken against the hooligans who had entered his private complex and damaged his property, scuffled with the staff and intimidated his son.

District Congress Committee president Budhi Singh Thakur alleged that the Kullu SP is not conducting the investigation into this matter properly. He said that the BJP workers should have been arrested for creating a ruckus at a private property but the police had wrongly registered a cross-FIR against Congress workers and the MLA’s son.

Meanwhile, the dharna ended today as the MLA had to leave for Shimla to attend the Assembly sessions. Kullu SP Gaurav Singh said that action would be taken as per law.