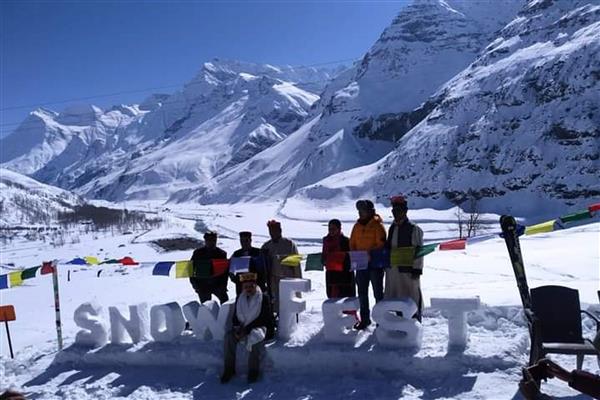 The 75-day Snow Festival will begin with prayers at the famous Triloknath temple in the Lahaul valley on January 13, said DC Neeraj Kumar here today.

He presided over a meeting with the officials at the auditorium in his office to decide the framework for organising the festival, which would be inaugurated by Minister for Technical Education Ram Lal Markanda.

Neeraj Kumar said that the festival would be celebrated according to religious beliefs and traditional customs, and also keeping in mind the calendar fixed by the Lamas (monks) of the valley for various events. The festivals of Udna, Gochi, Halda, Fagli and Yor organised in Gahar, Pattan and Tinan valleys would also be associated with the Snow Festival to make tourists aware about the rich traditions of the region.

He said that a craft mela and a tribal dance fair would also be organised.

To exhibit ancient artifacts related to the religious and social life of Lahaul, the Snow Craft and Food Festival would also be held, he added.

Traditional sports competitions would be organised for women and children.

The festival was launched in January this year. It is one of the longest festivals celebrated in India and is on a par with the 75-day Bastar Dussehra held in Chhattisgarh. The cultural traditions and ancient festivals have been rejuvenated through this festival.