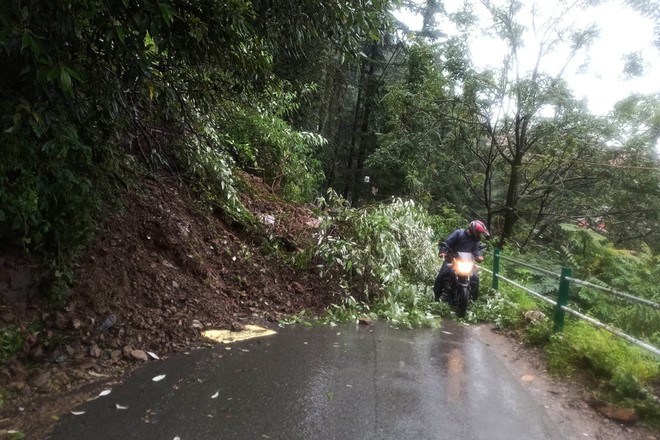 A commuter passes through a landslide-hit road in Kanlog, Shimla, on Sunday. Photos: Amit Kanwar

Landslides triggered by incessant rain blocked the National Highway-5 at two places near Badhaal (border of Shimla and Kinnaur district) and Jeori in Rampur subdivision of Shimla district. However, no casualty was reported.

A large number of vehicles, including trucks carrying vegetables and apples, were stranded on the Kinnaur side after a slide blocked the road near Badhaal and machinery was deployed to clear the road. Traffic on the NH-5, which was blocked near Badhaal, was restored after almost seven hours.

Another slide blocked the NH-5 at Jeori as big boulders hanging at the hilltop fell on the road due to heavy rain. “The stretch was restored for two-way traffic this morning only,” said Rampur SDM Yadvendra Pal, adding that the road was thrown open to traffic as machines were already deployed at the site.

The traffic was partially disrupted on the Khalini-Vikasnagar road as an uprooted tree fell on the road. Shimla received 24 mm rain since last evening and several trees were uprooted, while electricity to Bemloe area remained snapped for hours.

Another slide took place at Bhattakuffar, but one-way traffic has been restored.

A portion of a house was damaged last night in Kanlog area of Shimla after a tree fell on it, but the family members escaped unhurt. The owner of the house, Abhishek Singh Negi, rued that three trees were posing threat to his property.

“We requested the forest department to cut the trees thrice but nothing had been done so far. The authorities, however, swung into action today morning and removed the trees posing a threat to the house,” he said.

Higher reaches and tribal areas, including the Kunjam Pass, the Rohtang Pass, the Sach Pass and the Baralacha la, received another spell of snowfall, triggering cold wave in the adjoining valleys.

The toll in rain-related incidents during the current monsoon season mounted to 381 with two more deaths (one each in Kinnaur and Shimla districts) in the past 24 hours. As many as 28 roads were closed in the state.

The local MeT office has predicted wet weather in the region till September 17. There was no significant change in the minimum temperatures and Keylong was coldest at night, recording a low of 9.4 degree C. Maximum temperatures decreased by 5 to 6 degree and Una was hottest in the day with a high of 27.2 degree C.