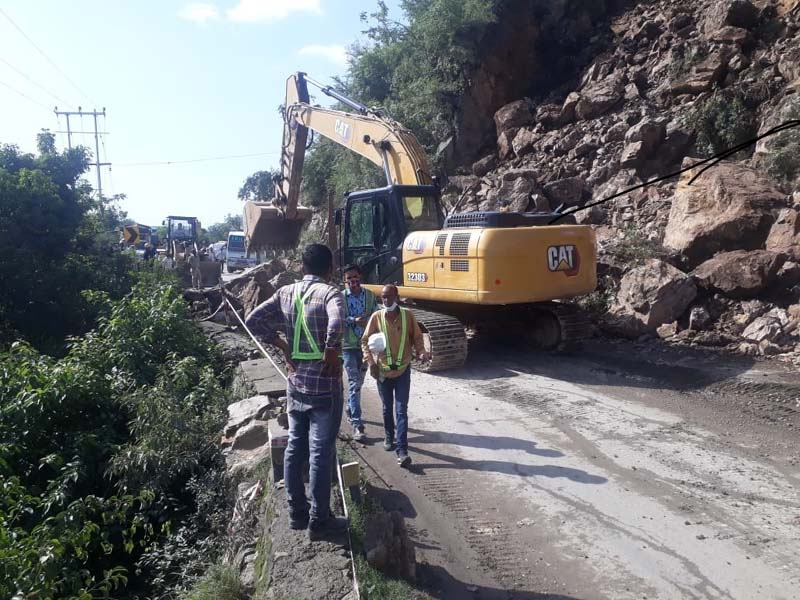 The work under way to clear the highway at Dedghrat on the Solan-Kandaghat section on Wednesday.

The traffic on the Solan-Kandaghat section of the Kalka-Shimla National Highway (NH)-05 was disrupted for about an hour around 9 am with huge boulders and debris flowing down the hill.

The excavation of the hill is been undertaken as the highway is being four-laned. This has made the highway vulnerable to landslips at several spots.

“A landslide at Dedghrat on the Solan-Kandaghat blocked the road this morning. The traffic was restored within an hour. The machinery was rushed to the site by the private company engaged in four-laning the section of the highway to clear the debris,” said SDM Ajay Yadav.

No excavation work, however, was under way at Dedghrat where the landslide occurred. Such disruptions have become a routine affair on the highway in the rains as four-laning work was in an advanced stage.

To ensure speedier restoration of traffic during such eventualities, officials of the NHAI as well as the PWD have been directed by the DC to map such vulnerable spots and keep machinery ready. Directions to educate the commuters by erecting signage at vulnerable spots has also been issued.

The SDM said arterial routes had been mapped between Saproon and Chambaghat as well as between Chambaghat and Kandaghat to divert traffic in case of any eventuality. The delay in completing the Solan bypass has added to the woes of the commuters. The road would have helped in bypassing a major chunk of the traffic from Solan and would have specially been helpful in diverting traffic during four-laning of the highway.

Work to construct the 5.14 km bypass, which began in December 2016, was yet to be completed.