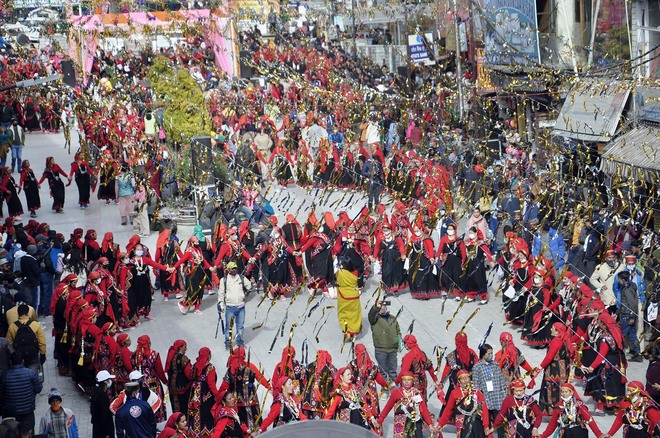 Women perform 'Kulvi nati' during the Winter Carnival in Manali on Monday. PTI

Women donning the local attire enthralled the audience by performing ‘maha nati’ at the Mall on the second day of the Winter Carnival in Manali today. Hundreds of women of over 80 mahila mandals performed ‘nati’ for over one hour, which remained the centre of attraction for tourists and locals alike.

Education Minister Govind Thakur said Kullu’s ‘nati’ was world famous and the traditional attire worn at the time of the dance form was very attractive. He appreciated the efforts of the organisers to promote tourism and preserve the folk culture.

The minister said the Winter Carnival had immense significance in view of tourism, trade and preservation of traditional beliefs and culture. The carnival provided a platform to various artistes of different states to showcase their talent, he added.

Various artistes gave cultural performances at Manu Rangshala, an open air auditorium. The audience lauded the old songs presented by the singers. The artistes from Lahaul also amused the spectators with their traditional presentations.

Artistes from Chandigarh University impressed the audience with their Punjabi dance, while the artistes of Kangra Kala Manch presented ‘Jhamakra’. The audience was left spell-bound by the performance of Nepali folk dance.

The participants of Voice of Carnival, who came from all over the state along with folk artistes, also regaled the audience. Students of Monal Public School, Aleo, garnered a lot of applause by performing Punjabi dance. The audience applauded the folk dance of Kullu by Jagatsukh Mahila Mandal. Artistes of Jyoti group presented a group dance. ‘Gaddi’ dance was performed by artistes from Dharamsala.